Interest in Cult Beers May Have Peaked According to Google Trends 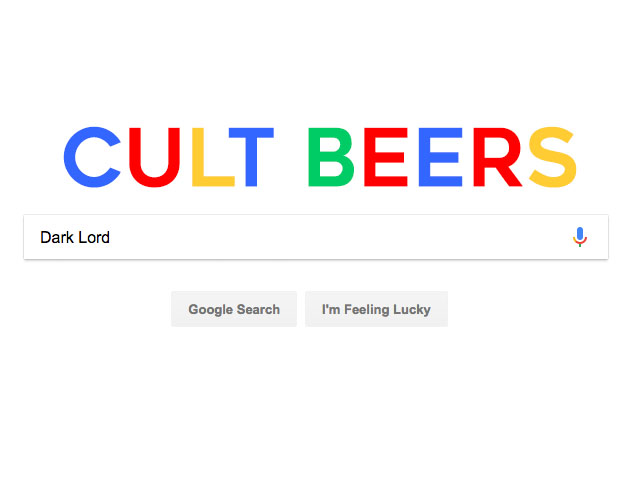 Pliny the Younger, Russian River Brewing’s special, highly-limited Triple IPA is released with much fanfare early February each year during Pliny the Younger Day. People line-up for hours outside Russian River brewpub in downtown Santa Rosa just for a glass of this uber-hoppy, mythical brew. It’s somewhat of a polarizing event among beers geeks, some claiming Pliny the Younger is over-hyped beer, with its cult-like status artificially propped up by Russian River by intentionally making it scarce. Others swear the beer lives up to its considerable reputation, and worth camping out overnight on the sidewalk just for a taste of it. 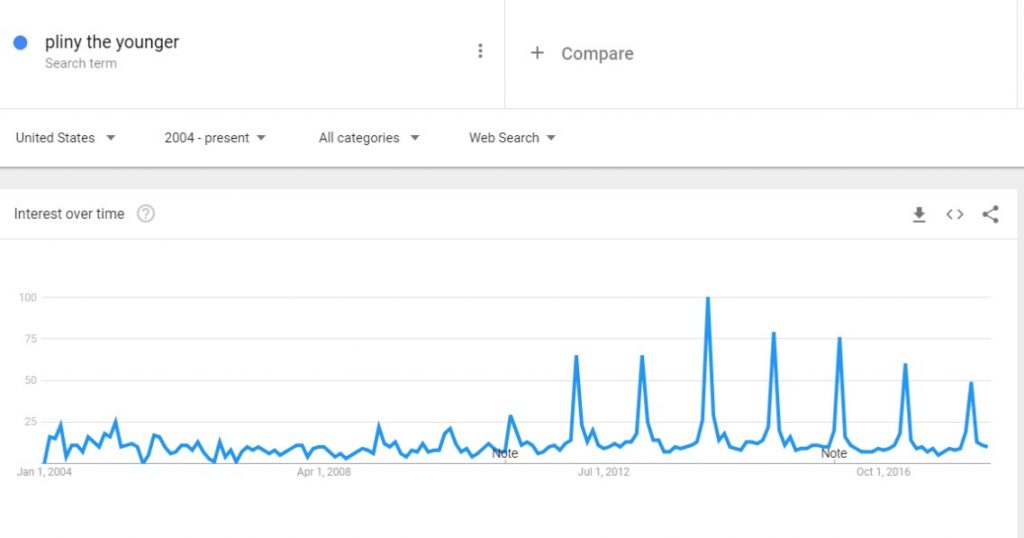 Russian River’s Pliny the Elder, its other rare hoppy brew with a similar cult-like following available year ’round has seen a similar fate. It’s Google search frequency peaks between 2013 and 2015, and is currently around 50% of that peak. 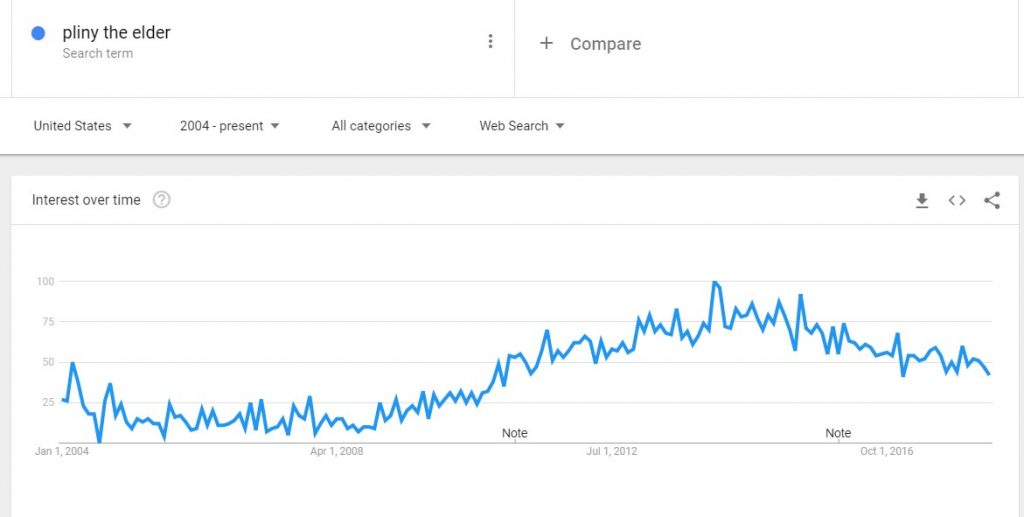 What about Three Floyds Dark Lord, a rare Imperial Stout released each year on Dark Lord Day, which occurs each year either late April or May? The Google trends data is similar. The search term “Dark Lord” is a little problematical, since a Google search of the term will bring up not only the Three Floyds brew but plenty of links to science fiction and gaming sites. However, a  Google search of “Dark Lord Day” yields nothing but news releases and internet chatter on the beer, and a Google trends search shows strong peaks occurring each spring. 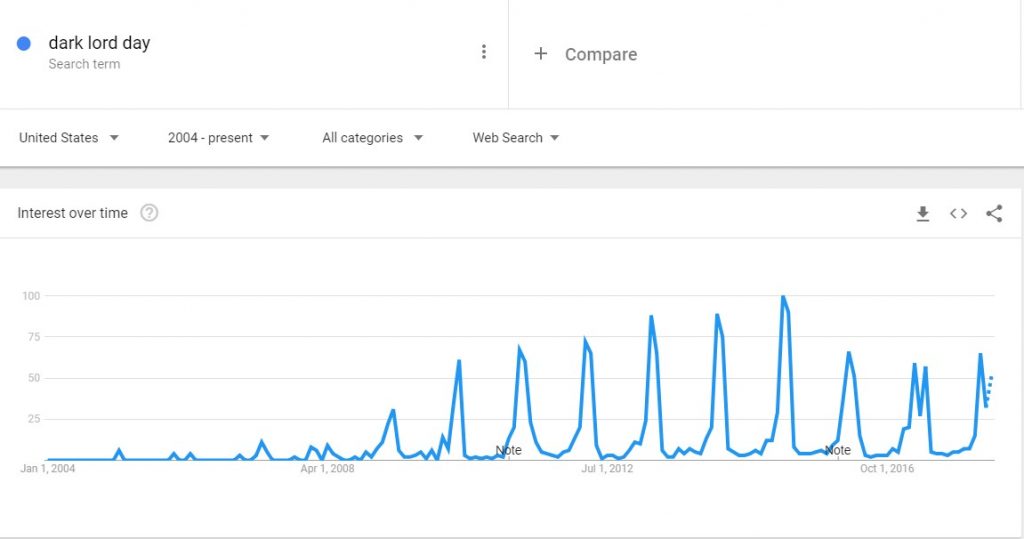 The strongest peak for “dark lord day” occurred in 2015, and currently the frequency of “dark lord day” searches is about half of the peak. Searches for “dark lord beer” and “three floyds dark lord” are less common, but show the same basic trend.  Searches for “dark lord” have a large “background” due to searches unrelated to the beer, but show these springtime peaks emerging from the background. It’s worth noting the strongest peak for “dark lord” occurred in 2016 instead of 2015, but then the yearly peaks in May largely dissipate there after.  Anyway you slice it, searches for Three Floyds’s cult Imperial Stout peaked at least two years ago, and most likely three years ago.  Three Floyds has about the same luck with their other cult brew, Zombie Dust. 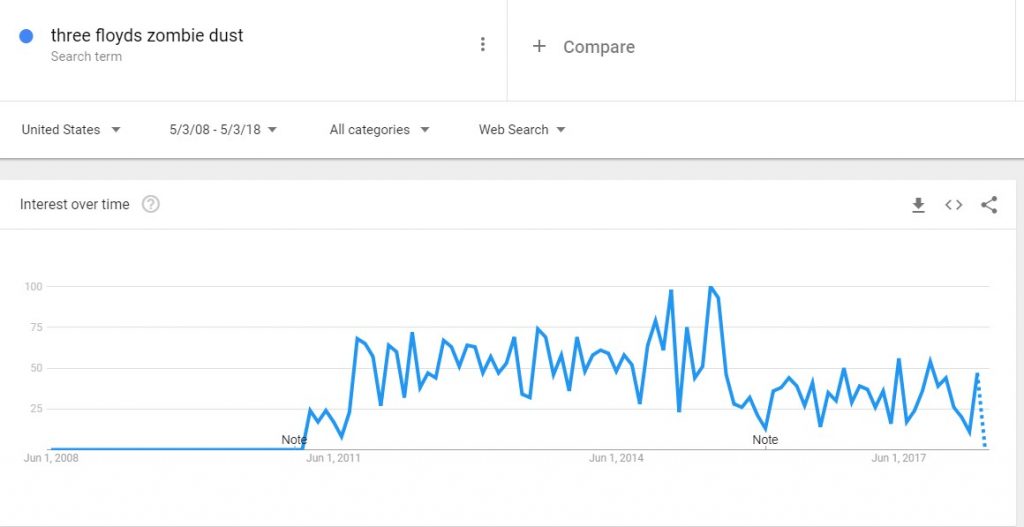 The data is a little noisy since Zombie Dust is available year around but searches are down from their April 2012 peak and there’s a noticeable drop off since 2015.

Let’s go to the East Coast, where Heady Topper, the limited release IPA from The Alchemist is all the rage. With New England Style IPAs being so hot, interest in Heady Topper ought to be going through the roof, right? Nope! In fact, interest is way down and moving further south. The Google Trends data for “heady topper” peaks in July 2015, and then steadily decline afterwards, which the current search frequency about 25% of the peak despite New England style IPAs being way more popular now than they were in 2015. 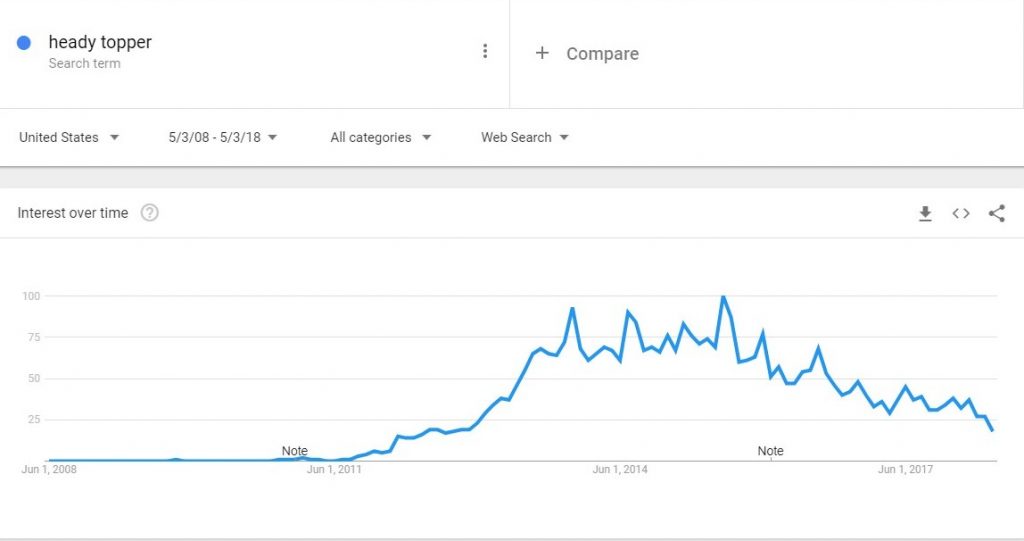 Then there’s Sam Adam’s Utopias, released at irregular intervals since 2002, sold in ornate vessels costing $200 a pop. Here, the results are a bit surprising.  If you graph the search trend data for “sam adams utopia” and “sam adams utopias“, you’ll find a few bumps and peaks over time but generally declining interest from a 2009 peak, and then pow!. Suddenly in November of last year, everyone is searching Google for them. 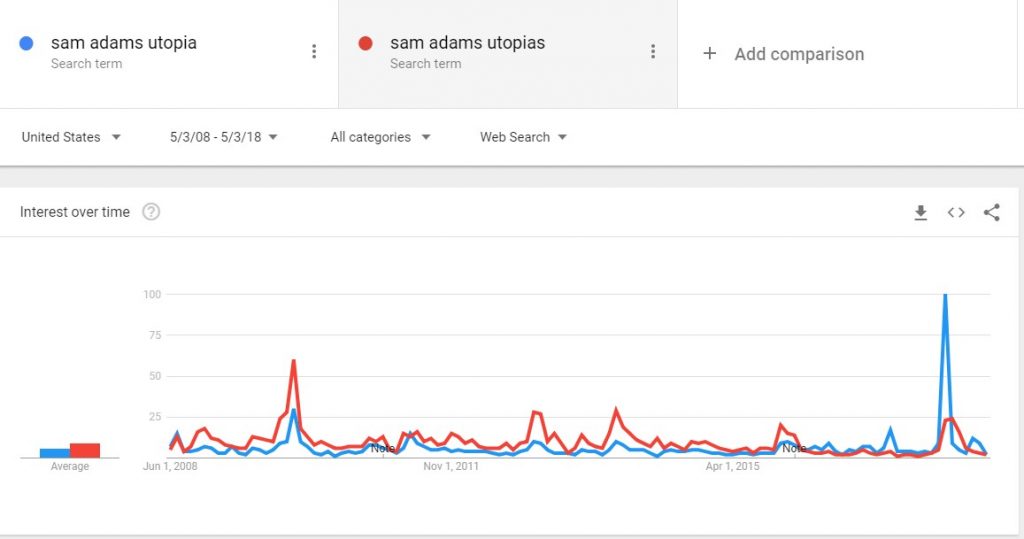 What happened last November? Well, new Utopias were just releasedand then the news broke that the 28% abv brew was illegal in 15 states, a story that turned out to be largely incorrect. While the 2017 release of Utopias generated a lot of buzz for Sam Adams, the 2015 release was but a small blip in the trends data, lower than peaks in prior years, with the 2009 Utopias release creating the largest spike in Google searches.

A better counter-example is Founders Brewing Canadian Breakfast Stout a rich, smooth, and highly decadent Imperial Stout aged in maple syrup barrels. (I’ve had this brew recently, it’s REALLY good.) It was first released in 2011, then there was apparently a very limited release in 2015, and another release late last year. From the trends data, the most recent release has been the one most sought after. 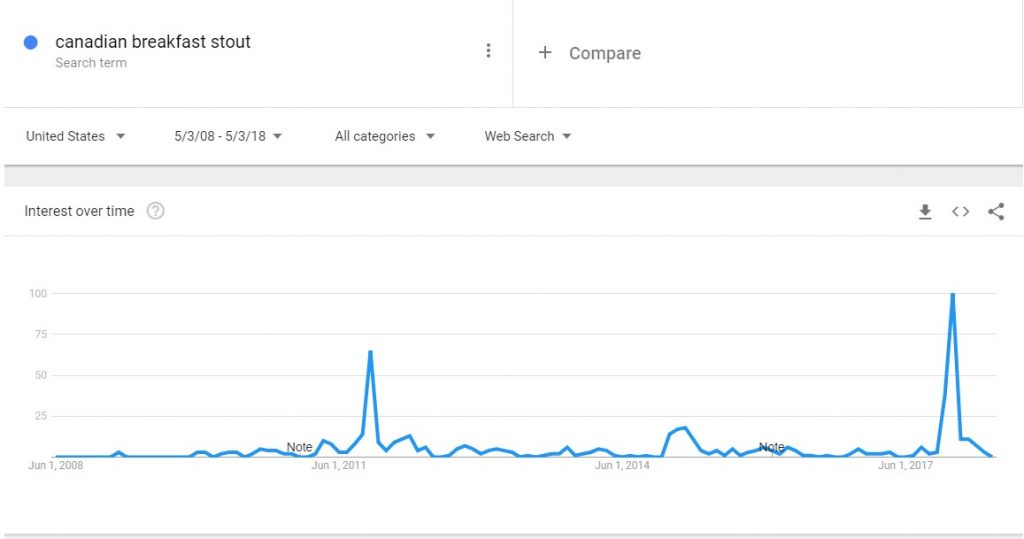 Other rare, cult beers like “Cantillon Zwanze“, “Hair of the Dog Dave” and “The Bruery Black Tuesday” show weak Google Trends signals that are clearly petering out from previous highs three to ten years ago. The search data for these type of beers all say pretty much the same thing. People are searching for these beers on Google a lot less than they used to, with a couple exceptions.  And one of these exceptions has a pretty large asterisk.

So why the decline? One could argue these beers are as popular as ever and since they’ve been around for a while, people know exactly where to find them and no longer need to search for them on Google. Or perhaps people are using social media more to find these beers than they used to rather than Google. There may be something to these arguments, but social media was definitely around a few years ago when Google searches of these beers peaked. I’m finding it difficult to explain the 50-75% drop in searches simply because people either no longer needed to search for them, or they found out about these beers through other means.

A stronger explanation, in my opinion, is with all the new breweries and beers coming into the market, beers like Pliny the Younger/Elder, Dark Lord, or Heady Topper no longer tower over the industry. Since they are rare and hard to get, people stopped searching for them and turned to more readily available alternatives. The first time I tried Pliny the Elder about ten years ago, it was a blast of hops way beyond most any beer on the market. It was worth the effort  to find. Of course, other breweries took notice. They started investigating how to brew their own uber-hoppy brews. As a result, the industry has basically caught up and now, Pliny the Elder is just one of many excellent IPAs. No use searching for it online when plenty of comparable beers can be found with a lot less effort.

Cult beers will likely continue maintain some level of mystique, and going the tremendous lengths necessary just to drink them will remain a right of passage for certain beer geeks. But they can no longer dominate brewing like the once did, as comparable beers are far more ubiquitous. It no longer requires and extraordinary effort just to enjoy an extraordinary beer. That’s good for everyone.

Derrick Peterman lives in the Silicon Valley where he runs in the morning and enjoys a beer or two most evenings. He writes about beer (mostly) and running (sometimes) at “Ramblings of a Beer Runner” <ramblings-of-a-beer-runner.blog>

Golden Road Is Quickly Learning They Aren’t the King When it Comes to Sacramento Anthony Bourdain: Sharing the World