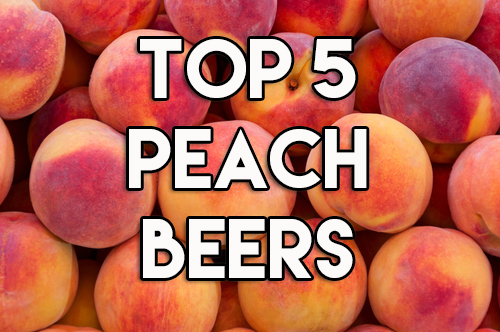 If there’s one type of craft beer that I love more than pumpkin beer, it’s peach beer.  Many brewers have experimented with fruits over the years, many have had success while some other’s have not. From my perspective any fruit beer, peach or not, needs to taste authentic. By authentic, I mean as close to the fruit as possible and not like a Jolly Rancher candy or an artificially flavored soda.

Today, I attempt to rank the five best peach beers, as a nod to that shitty Super Bowl commercial that got many a jimmy rustled.

5. Great Divide Peach Grand Cru – This beer made it’s bottled debut in 2013, and was a great addition to Great Divide’s strong ale portfolio. This beer takes a strong Belgian-Style strong ale base with the perfect amount of ripe sweet peach flavor to give it a second layer of deliciousness.

4. Terrapin Maggie’s Farmhouse – This is a unique seasonal from Terrapin Beer Co. in Athens, GA.  The first thing that came to my mind was peach iced tea.  Very refreshing and delicious.

3. New Belgium Eric’s Ale – This beer has been a cult favorite coming out of the same brewhouse that makes Fat Tire Amber Ale. New Belgium has a great handle on making sour ales, and Eric’s Ale is at the top of that list.  This beer brings great tartness, juicy peach and a kiss of oak. We know you are reading this New Belgium, BOTTLE THIS AGAIN SOON!

2. Logsdon Peche n Brett – Logsdon Organic Farmhouse Ales is a fairly young brewery coming out of Hood River, OR.  They have been making some of the most amazing rustic style farmhouse beers using local organic fruits and spiking some of those with Brettanomyces for a funky and tart experience.  On my short list of dessert island beers is their Peche n Brett, which is their oaked, bretted saison with copious amounts of peaches added.  This comes out once a year and limited amounts make it down to California. Unlike the Great Divide and Terrapin beers, this showcases some tartness rather than full on sweetness from the fruit.

1. Dogfish Head Festina Peche – Long before the current Gose and Berliner craze we are in the middle of, Dogfish Head made a very peachy seasonal known as Festina Peche. Festina Peche is designed to resemble a low alcohol, tart German-Style wheat ale with peaches added.  When fresh, this beer is amazing and highly drinkable. I wouldn’t consider this beer sour, but it has a tart finish that brings you quickly back for another sip.

Honorable mention: There is a brewery in Anaheim California named Hoparaazi  Brewing that makes a peach sour called Mission Impechable. This beer has made sporadic appearances at some beer tastings and festivals in Southern California. Once these talented folks open their tasting room and possibly package their beer, they will be put on the map for making magical peach beer.