I have so many fond milestone memories from the beginning of my craft beer journey. Many of them involve exploring the beers listed on the top 50 lists on Rate Beer and BeerAdvocate. Beers like 3 Floyds’ Dark Lord Imperial Stout, Deschutes’ The Abyss, Russian River’s Pliny the Elder and the illustrious Dogfish Head’s 120 Minute IPA held court at the top of these lists, and with good reason. 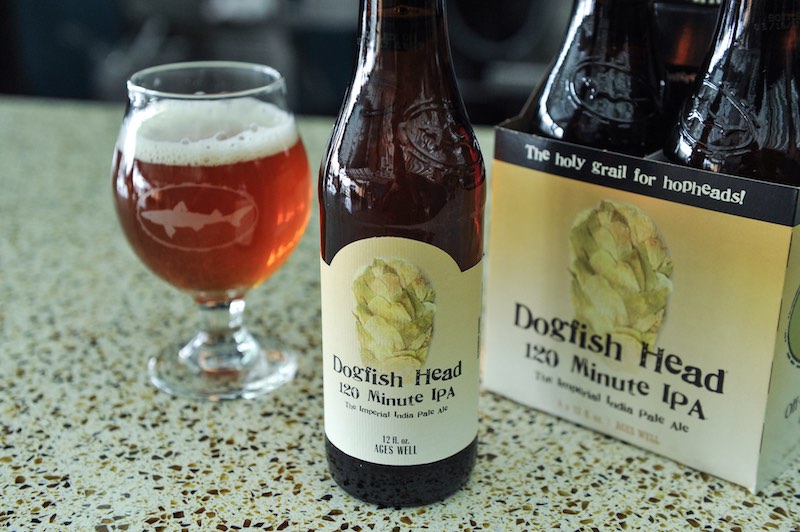 While obtaining the top 10 beers in the world wasn’t nearly as hard a decade ago as it is now to even score a can of Tree House IPA, a bit of effort had to be put into finding the highly rated beers that weren’t in year round rotation. Typically, you would have to call or drive around, and your best bet would be to build a relationship with a few of your local liquor store beer buyers.

One beer from yesteryear that has maintained its luster and cult status is Dogfish Head 120 Minute IPA. For those not familiar, it’s one of Dogfish Head’s most popular beers. The story goes that it is an “IPA” that has been continuously hopped for the duration of the 120 minute boil. Once you have your first sip of this beer, you will know that this beer is anything but an IPA. While not listed on the label, this beer hovers between 16% and 18% alcohol by volume and there is no hiding this fact when smelling and sipping it. You are met with a strong whiff of citrus essence, honey suckle and for lack of a better term, alcohol, right out of the gate. Your first sip is likely to be euphoric, with an overload of boozy hop custard in your mouth. In my younger days, I have finished a bottle of this myself; you will most likely catch a buzz from this beer on a five or six ounce pour.

Since its inception in 2003, those who can get their hands on this do whatever they can to stock up on this beer, as it is only released twice a year, if that. Unlike almost all other “IPAs” or “Double IPAs”, people actually hold onto and age this beer in their cellars. The general consensus among die hard 120 Minute fans is that this beer is closer to a barleywine and gracefully mellows over time. Considering how boozy and hot this beer is fresh, I can get behind this initiative.

There are two things I find very interesting with this particular beer. First, there is little about this beer that resembles an IPA by yesteryear’s standards or today’s standards. Second, to this day it still has as strong of a following as it did over a decade ago.
We’ve seen many hyped up and popular beers fall out of grace with the ultra fickle craft beer fan, but not 120 Minute IPA by Dogfish Head. People aren’t chasing down other highly rated beers of yesteryear like Deschutes The Abyss, Stone’s Bourbon Barrel Aged  Imperial Stout, 3 Floyds Zombie Dust, etc. All beers mentioned are great, but the fanfare has died down.

There are two reasons why Dogfish 120 Minute IPA still has a huge following. The first reason is a warm sense of nostalgia. Just holding a bottle in my hand takes me back to the moment in the car with my dad driving to a local South Jersey liquor store. Explaining to my dad about a nearly $10 bottle of beer that had the strength of an entire six pack. Asking the liquor store clerk to go in the back and get my two bottle limit. Wrapping these bottles in my suitcase for my trip back to Southern California where Dogfish Head had not yet expanded their distribution to. Letting my beer buddies know that I got “the good stuff” from back east. Reading online about people comparing a five year old bottle to a fresh bottle. If you ask any liquor store employee or browse regional beer groups on Facebook, people are still very much seeking this beer out, hoarding it for a special occasion or for a future vertical tasting. When cool guys scoff at the notion of such an old school beer being sought after, plenty of 120 Minute IPA fans speak up in defense of this seemingly magical elixir.

So what might the other reason be why 120 Minute IPA still has a cult following in 2017? As the great beer pioneer Sam Jackson once said, “It will GET YA DRUNK!” I wouldn’t call this beer quite a double or triple IPA and it’s too hoppy and citrusy to really be considered a barleywine. It sips like an after-dinner liquor to me. Very few beers will give you a happy head change like this beer does with a half serving. A full bottle definitely fulfills the work load of a night of drinking. While we’d all like to think of ourselves as classy, responsible beer aficionados, sometimes a really good or a really bad day calls for some alcohol, and this is a nice way to introduce it into your mouth and blood stream.

So while you can refer back to many other hugely popular beers that eventually fall out of the popularity spotlight, it would seem that the mix of nostalgia and strength (alcohol and flavor) will keep Dogfish Head 120 Minute IPA exciting to new and old drinkers for years to come.