For the past five years, The Full Pint has held small, intimate parties to celebrate our annual anniversary of running this very website. We started at year five because we weren’t sure if people would be interested in a beer news website’s anniversary party. Right after we had a fun 5th Anniversary jam at Naja’s Place in 2012, we knew we had to continue on and attempt to outdo ourselves each year. 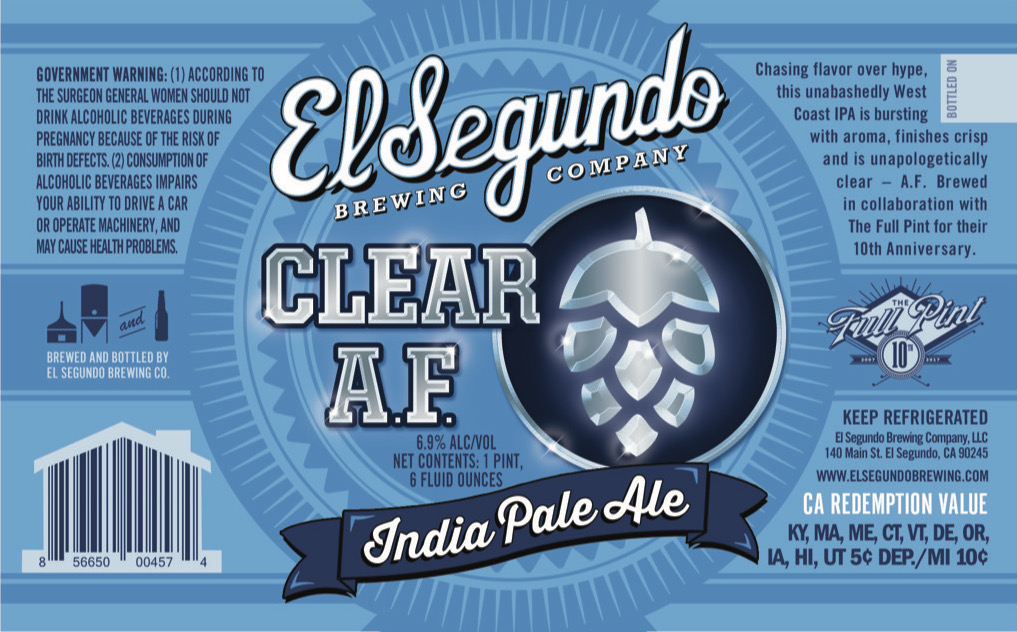 Fast forward to early 2017, and I began reaching out to many of my favorite breweries across the country to see if we could get either a custom beer made in honor of our 10th Anniversary or even better, a collaboration brew honoring the milestone. At the top of our list was our friends over at El Segundo Brewing, who made Danny’s Danker Tanker in 2015 and DFJ IPA in 2016 for our previous year’s parties. I had asked El Segundo Big Wig Tom Kelly if this year we could do a collab brew AND have it bottled. Over the course of 8 months, there was a lot of casual go-back-and-forth with Tom, with the feeling that it may not be worth the time and money bottling the beer, with all that’s involved in the process, just for a one-off beer.

Then we got a text message in July from El Segundo owner Rob Croxall telling us we are on the brew schedule to make a collab brew for the party that was in August! So cool, except Jonny and I were out of town that weekend brewing a collab beer with Tired Hands in Ardmore, PA. Luckily, we have such an amazing team here at The Full Pint, and Franny and Javi stepped right up and went down real early to El Segundo Brewing. Now you may have seen what collab days look like on Facebook from many rockstar breweries. There’s usually a photo op and a symbolic picture of somebody mashing in or graining out. Not on Franny Fullpint’s watch. Franny and Javi were there to mill, mash, sparge, kettle hop and whirlpool. It was agreed upon beforehand that we would make a beer that we loved and a beer that is in El Segundo’s wheelhouse. That would be a clean and clear West Coast IPA with dialed back bitterness. The hop bill consisted of  Citra, Nelson, El Dorado and Mosaic.

As the beer was shaping up in the bright tank, a group text was started on what to name this beer of love. Franny quickly wrote back Clear AF IPA. Perfect I thought. It’s true and is making a statement.

Then I got an email from Tom Kelly, asking what we thought about the beer being bottled. YES OF COURSE I told him, that’s what we had in mind. He claimed the beer was such a big hit, with the perfect name, sold as the anti-haze in a market that’s quickly being saturated by pastry hops.

So now the beer is on the market and many more people are getting to try this beer, and this batch is tasting as good as the first one. Do you want to try it? Of course you do. If you can’t find it at your local grocery store, please click this link to order it from our friends at CraftShack.