The 20 Best IPA Brewers in California 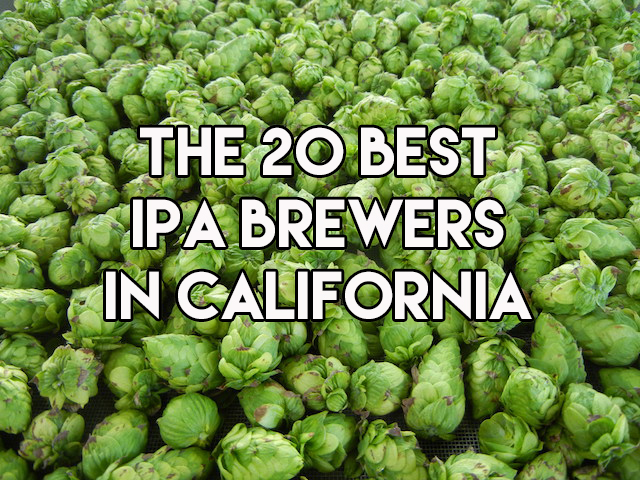 Even as a kid, I always looked at a map and was amazed at how big California is.  Knowing what I know now, California could do just fine if we left the union.  Furthermore, we make enough amazing beer that if other states and countries stopped importing their beers into the Golden State, that we’d have plenty of great options.  If you are new to craft beer, or you are planning a trip out west, check out this list of the 20 best IPA brewers in California. I know I probably missed a very important brewery, that’s just a mistake. Feel free to let us know. IN ALPHABETICAL ORDER…

AleSmith Brewing – Many know of AleSmith for their big, round malty beers, but they have some of the best, highly rated hoppy beers, that paved the way for many others in San Diego.  When fresh, nothing compares to AleSmith IPA. The recently rebranded Summer YuleSmith, now known as Double IPA is killer, and their .394 San Diego Pale Ale has been a real treat for hop lovers.

Alpine Beer Co. –  Even after the Green Flash/Alpine merger of last year, some of the most fantastic IPAs are made in the small city of Alpine,CA.  After years of scratching my head as to why it was so hard to get my hands on that beer, I took a visit, and understand that their kitchen sized brewery can only make so much beer.  The scenery in Alpine is beautiful, the brewery and pub are definitely worth the visit.

Arts District Brewing – Pizza Port Alumni Devon Randall is heading up a small brewpub in the Downtown LA area. She took her hop crafting skills with her and is busting out some tasty, perfect examples of West Coast IPA. While they can’t make enough beer at the moment, I look forward to having more hoppy goodness from them.

Beachwood BBQ and Brewing – Those who follow Beachwood yearly during GABF time might know them for their award winning beers of various styles, but believe me, they make absolutely perfect, crushable IPAs. They’ve never made one that I didn’t like.

Cellarmaker Brewing – These boys make some of the dankest small batch juicy IPAs in possibly the world.  Out of a relatively small brewery in San Francisco, Cellarmaker is making cutting edge IPAs. They have proudly touted using very rare hops and have yielded great results. They are doing very small runs of cans and bottles, but the best way to enjoy is on tap, at the source.

Drake’s Brewing – Longtime Northern California favorite sometimes gets overlooked, Drake’s has a stellar lineup of clean hoppy ales ranging from 4% up to 9%.  They have recently expanded their Hopocalypse and Aroma Coma lines to express different hop varieties and malt bills. When fresh, nothing’s better.

El Segundo Brewing – Years ago, if you lived in Southern California, you had to rely on Beachwood Brewing or beers from North or South to get your IPA fix. Then along came El Segundo Brewing.  While nationally known for their collab with Stone Cold Steve Austin, El Segundo has found their niche in pumping out some of the best hoppy ales in the southland. They have all the newest fruity dank hops on hand, and somehow make each beer in their lineup unique from one another.

Faction Brewing – Former Drake’s and Triple Rock Brewmaster Rodger Davis started his own production brewery a few years ago, and instantly nailed it.  Sometimes Faction goes under the radar, as they are currently only selling draft only.  Perfectly attenuated, low bitterness, high aroma and complex flavor is what you can expect when you get a Faction IPA.

Fieldwork Brewing – Another new kid from Northern California, Fieldwork is making a new in their short amount of time brewing.  While I have only had a few samples that I’ve immensely enjoyed, their reputation speaks for itself.

Firestone Walker Brewing – Now considered one of the pioneers of California craft, Firestone Walker continues to stay at the head of the pack with their hoppy beer lineup. While balancing approachability and cutting edge at the same time, they have managed to bring the perfect examples of hoppy beer to the mass market with their line up “Jack” beers as well as the new Luponic Distortion. When fresh, there may be no better value.

Highland Park Brewery – I do my best to steer clear of hype. Hype is what surrounded Highland Park Brewery immediately upon opening.  After letting some of that hype die down, I went into the micro-size brew pub with a chip on my shoulder. Said chip was cleanly knocked off my shoulder with their clean, ultra-drinkable IPAs. While my favorite might be Neon IPA, Bonkers, Hello LA and 1 up IPA are amazing.

Modern Times Beer – Once you get past all of Modern Times Beer’s Ninja Turtle marketing talk, you will find that they are making some stellar beers. If you are an IPA lover like myself, you will really appreciate their ongoing seasonal IPA rotation.  Some in bottles, some in cans, they are all fresh, unique, and are at the middle of the road in terms of pricing.

Monkish Brewing – I cannot believe I am typing this.  Belgian-style masters Monkish Brewing began canning trendy modern IPAs. And people love them. What I’ve had so far have been great, I expect them to continue on with the program and staying in line with the rest of the region.

Noble Ale Works – Evan Price and crew come up with so many different styles of beer with crazy names, it’s hard to keep track. In the past few years, they have really taken the lead in Orange County as makers of fine Session IPAs, IPAs and Double IPAs.  Their I Love It IPA just won Gold Medal IPA in the World Beer Cup, so those old stuffy judges see eye to eye on something.

Pizza Port Brewing – Since moving out to California, one of my first stops and sometimes my last stop before heading home is always Pizza Port Brewing.  There’s always a great vibe and breeze in the air, and just as important, there is always super fresh IPAs on tap.  I’ve never really concerned myself to remember the names of many of their IPAs, which could come from any of the 5 locations, I just know they are sure to be good. In the last few years, Pizza Port began canning and distributing a core lineup, which includes Ponto Session IPA and Swami’s IPA. My initial reaction was the idea was blasphemous, but I quickly got over that when I was able to get two week old Swami’s 16 oz. 6 pack for $11.

Russian River Brewing – Russian River Brewing has gained a cult following for their Pliny The Elder and Pliny The Younger, thanks to national exposure from beer rating sites and men’s magazines. The truth is, their beer lives up to the hype.  In addition to the Pliny family, Russian River’s Blind Pig IPA is desert island beer good, and Row 2 Hill 56 is pretty darn fantastic.

Sierra Nevada Brewing – I am often critical of Sierra Nevada’s seasonal IPA offerings, as I claim that they taste like just another Sierra Nevada beer. What I sometimes fail to mention is, that’s a good thing. You really can taste the care, quality of labor and quality of ingredients in every beer.  They might be the only IPA maker in the world that has such a long shelf life.  Their latest flagship IPA Hop Hunter is fantastic, and you should give it a try, even if you aren’t a fan of Pale Ale or Torpedo IPA.

Societe Brewing – Now four years old, Societe Brewing has been knocking it out of the park from the moment they opened their doors in San Diego.  Their beers are clean, delicious, easy to drink. Because they have such a strong philosophy on quality control and process, you will get a consistant pour whether you are in their tasting room or off-site account.

Stone Brewing – The big har har for years has been that Stone’s inevitably going to make yet another IPA. You know what, I’m ok with that, because they are really good at it. Their Stone IPA brings new beer drinkers to the door, then their stronger and seasonal IPA offerings keep you in the door for life. Now that flagship Stone IPA and Go-To IPA are in cans, there’s a new layer of freshness to be had.

Three Weavers Brewing – Right in the Southbay, along with El Segundo, Monkish and Smog City is Three Weavers Brewing.  They have pretty much nailed every style they’ve brewed, their Session, IPA and Double IPA  are perfect examples of well executed IPAs. We look forward to some expansion that would involve getting the beer into more people’s hands and mouths.

GLARING OMISSION – Kern River Brewing – Just Outstanding, Citra DIPA, Shuttlebunny are some of the best hoppy beers in the world.