The AB-InBev “Why Don’t They Like Us” Tour Continues 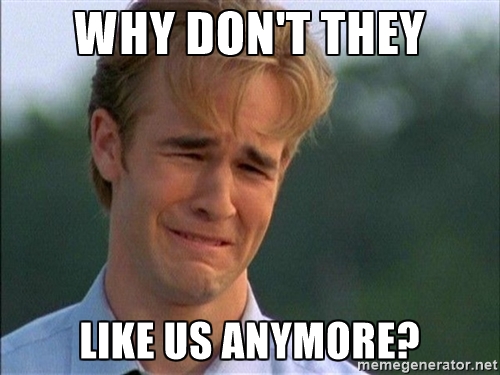 As a repercussion of AB-InBev purchasing up regional craft breweries over the past two years, many fans have taken a righteous stand, and have turned their backs on the companies that have traded their independence for global beverage domination. Parallel to fan backlash, bars and independent retailers  are choosing wisely and opting out of carrying and promoting corporate owned craft brands.

As we read the third cookie cutter article outlining how 10 Barrel, Golden Road and Breckenridge figureheads are “fighting back” against the backlash of their former fan base, we have to wonder, how many more times will the same article be written? We’re guessing at least a half dozen more times.

In under two weeks, The Denver Post, The Denver Business Journal and Westword have all covered how tough it is being a great brewery, with tons of resources that’s no longer getting local love and street cred. Lots more of the “nothing has changed” meme is being spewed.

In these articles, we’ve learned that the corporate giant is organizing a dog and pony show (why the long face), in which they are prancing out these figureheads to beer bars in what I’d like to call the “Why don’t they like us?” tour.  I say the corporate giant is behind this, as I would hope these newly minted millionaires would be satisfied with the business decision they recently made, and didn’t decide to go on this PR tour on their own.  I don’t recall Ben & Jerry scrambling for street cred after selling to Unilever. Dr. Dre didn’t go back to Compton and pander to the homies after selling Beats to Apple for a few billion. Frankly, this is downright embarrassing to watch.

We know it’s tough having 12 handles at the local ball park. One can only imagine how tough it is to dominate every airport eatery with “craft beer.”  Seeing end caps at every grocery store in America has to take a toll on one’s soul after a while.  Listen guys, it’s going to be ok. The wounded heart takes time to heal, but believe me, it will.

Looking closer regarding them “fighting back”, it seems they are not content with being an international conglomerate that may make decent to good beer. They want to blend in with their respective communities, be part of the local guilds they were recently kicked out of, and receive the invitations to the festivals they are no longer being included in.  The whole purpose of local craft guilds and craft only festivals are to band together and protect themselves against the aggressive, predatory practices of the big guys.  Essentially, the wolves are scratching their heads as to why the lambs aren’t inviting them over for tea.

The issue isn’t whether or not these recently purchased breweries are making good beer or not, it’s about affiliation and intention.  There is bloodshed at the retail level right now, and it’s at the hands of AB-InBev.  I’m not clear why love and admiration of such a small fraction of beer drinkers is so important to these people in the big scheme of things. Whatever the reason is, it’s pathetic.

Here’s my advice to you teary eyed millionaires.  Find a nice vacation home and spend time with your families.  Get a golf instructor and get some golf lessons.  Let your brewers do the best they can, maybe they will win a gold medal at the Great American Beer Festival or World Beer cup, that will cheer you up!  Most importantly, please go away with what little dignity is left after this insanely planned out campaign that seems to be flooding the online Denver rags, this isn’t how rich people are supposed to act.