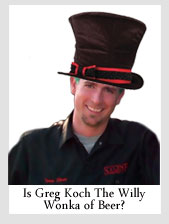 Come with me And you’ll be In a world of Pure Collaboration!

Stone Brewing Co. is at it again.  In the same fashion as the Alesmith/Mikkeller/Stone and the Jolly Pumpkin/Nogne-O/Stone Collaboration, they are teaming up to make a brew with Cambridge Brewing Co. and BrewDog. According to stonebrew.com, Will Meyer of Cambridge brewing, and James Watt of Brew Dog are holding a meet and greet March 26th from 6pm – 9pm.

This fun event is being dubbed Collaboration Eve, as March 27th, these two guest breweries will be joining Stone in creating a batch of beer together.

So what the heck will these three be making together? Your guess is as good as mine folks. When reaching out to Stone, I was referred to a very uninformative posting, only referring to the meet and greet and nothing more. Great, that’s what started this beer investigation!  When contacting Cambridge Brewing, I was given this great quote by Will Meyers, head brewer, “The first rule of Stone Collaboration, we don’t talk about Stone Collaboration.” What I did find out from Will was the obvious and not so obvious. First, he told me this beer would be high in ABV. Well I would have bet money on that fact, as the last two Collaboration ales were hovering in the 9% abv. region. The interesting fact I did get from Will is, the collaboration is not using the hops Stone has stockpiled in Escondido. He claimed he, James, and Mitch (Stone head brewer) had to go through other channels to get some hard-to-obtain hops, in addition to the special malts and yeast strains.

I will be honest, I am very interested because I enjoy these beers, and it gives me a chance to try something made from two brewers I haven’t tried yet. I hadn’t heard of Cambridge Brewing until this, as their are 1,527 craft breweries, and I learn something new daily, and I haven’t tried Brew Dog due to their price point.  I can draw a conclusion that Cambridge attracted Stone, and in particular CEO Greg Koch, due to their cuisine offerings at their restaurant.  Much like Stone World Bistro & Gardens, Cambridge Brewing appears to offer fancy lookin’, locally grown, and organic offerings to pair with their beer. Looks like a great fit from where I’m sitting.

As much as I would have loved to bring more information about the actual beer, I can respect the anticipation these brewers are building by not spilling the beans.  There is something to be said for the art of surprise. In the age of blogging and message boards, much of that has been lost.