(Dallas, TX) – Lakewood Brewing Company (LBC) opened its doors in North Texas 5 years ago, and is throwing a huge celebration party for the community. Everyone is invited to Lakewood’s Taproom & Beer Garden on Saturday, July 29th from 5:00 to 10:00 p.m. to enjoy a full evening of beer, food, games and live entertainment. 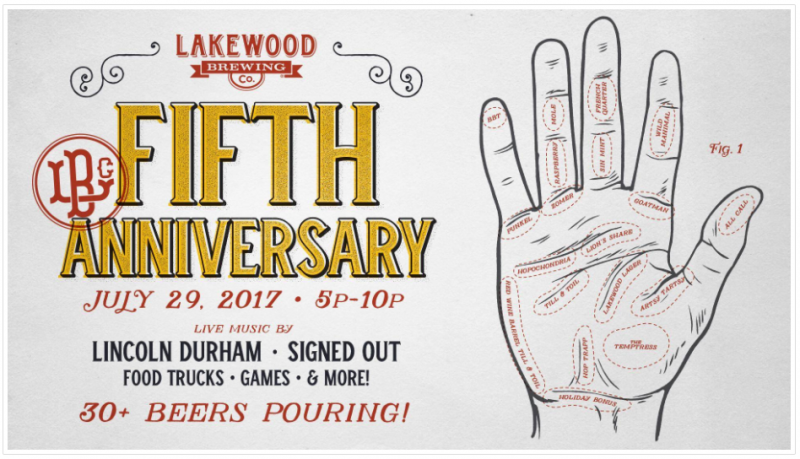 Wim Bens, Founder & President of Lakewood Brewing Company, reflects on their growth, “It continues to be a wild ride here at LBC. We’ve grown a lot over the years but, we are proud to continue to be an independent family-owned craft brewery, selling beer only in Texas.”

“This year’s celebration is going to be awesome, with the release of not just Lion Share 5 (our Scottish ale aged in Scotch and bourbon barrels) but multiple additional beers that are only available at the anniversary party,” Wim continues. “Our covered beer garden will feature incredible live local music and we’ll have local vendors to boot! Rain or shine this is going to be the best anniversary party yet!”

Attendees can expect to enjoy 30+ beers available on tap, including the debut of Lion’s Share V, LBC’s fifth anniversary beer, and an array of vintage and experimental releases and all the favorites people have come to know and love. Performing on stage in the Beer Garden are the bands Signed Out from 5:30-7:30 p.m. and Lincoln Durham from 8:00-9:30 p.m. Food trucks will be lined up & ready to serve good eats in the Beer Garden: PIT COMMANDER BBQ, 7 Sisters Gourmet Food Truck and Balls by Broads.

Online tickets can be purchased for $25 at bit.ly/LBCturns5 and includes entry into the party, a Fifth Anniversary souvenir glass and a sampling card good for four complimentary 8oz pours of your choice. Day-of tickets are $30 at the door, and include a vintage souvenir glass of your choice. Not drinking? Designated driver tickets are $10 at the door which includes entry into the party with your friends and family, but no beer – thank you for getting everyone home safe.

A “Can Stand” will also be onsite with cans of beer for just $3 each, as well as additional sampling cards for $10 each. (Cash only – don’t worry, an ATM will be on site.)

For more information on featured beers for the day, entertainment & times, and to purchase your ticket(s), visit lakewoodbrewing.com – @LakewoodBrewing – facebook