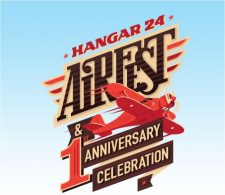 (Lake Havasu City, AZ) – It will be a celebration in the sky this fall as the Hangar 24 Lake Havasu City Brewery and Grill will mark the occasion of its first year of operation with a completely new AirFest at the Lake Havasu City Airport. The Nov. 4 Lake Havasu AirFest and 1st Anniversary Celebration will be patterned after Hangar 24 Craft Brewery’s wildly successful air shows at the Redlands (California) Municipal Airport, across the street from the Hangar 24 main production brewery and tasting room. As many as 17,000 people have packed the grounds in Redlands to watch the early-summer AirFests that also serve as the main brewery’s annual anniversary celebrations.

Opened late last year, the Hangar 24 Lake Havasu City Brewery and Grill is located at the Lake Havasu City Airport. It offers a full menu of burgers, sandwiches and wraps, to go along with a number of brewery offerings, including Betty IPA, Iconic Double IPA, and Orange Wheat. Hangar 24 Craft Brewery’s year-round core offerings, including the popular new 24 Blonde Ale, are available throughout Arizona.

Already confirmed for the Nov. 4 show in Lake Havasu City is the Hangar 24-sponsored biplane of Jon Melby, a veteran pilot and Air Force veteran, who has flown in air shows since 2002. Melby, a Chandler, Arizona, resident, joined the Hangar 24 family in May of this year. Other air show acts that have been confirmed include the Red Eagles Formation Team, Vicky Benzing Aerosports, Kent Pietsch’s Jelly Belly Interstate Cadet and the Smoke-n-Thunder Jet Car. More air show acts will be announced at a later date, along with music acts and activities for kids.

Hangar 24 Craft Brewery opened May of 2008 in Redlands as the creation of owner and brewmaster Ben Cook, a former homebrewer who also is an amateur pilot. The idea for the brewery came about on days Cook would fly with friends and then gather in the hangars at Redlands Municipal Airport to reminisce about the day and sample his latest batches of homebrew. Cook is an alum of the brewing program at UC Davis.

About Hangar 24 Craft Brewery
Hangar 24 is an independently owned craft brewery with locations in Redlands, California and Lake Havasu City, Arizona. The company produces a diverse award-winning line of beers ranging from the best-selling Orange Wheat to the exclusive barrel-aged Barrel Roll Series, including the renowned Pugachev’s Cobra.