We’d like to welcome the newest contributor to The Full Pint, GT Wharton.  GT is a longtime friend of the site. He is an avid taster/beer reviewer who spends time over at the RateBeer.com community. As of press time, GT has nearly 10,000 tasting notes logged at RateBeer. 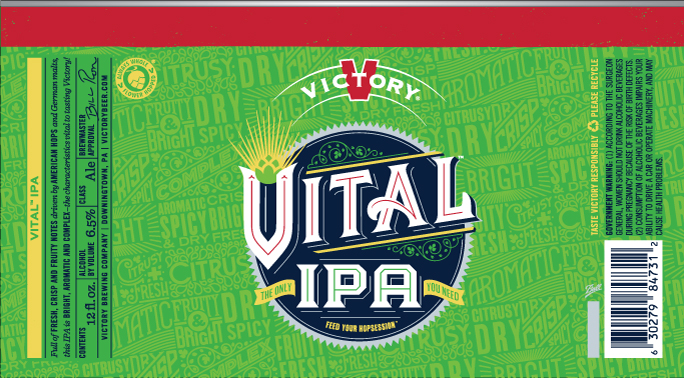 Commercial Description: The IPA style can be a powerhouse of flavors and impressions. But what is vital to you? What commands your taste and attention? We packed our Vital IPA full of fresh, crisp and fruity notes driven by whole flower American hops and robust German malts. You’ll find it bright, delightfully aromatic and complex, leaving you with dry, spicy satisfaction. Taste Victory in these flavors Vital to your senses.

I sampled this from a 12oz glass bottle as a full pour into a flared pint glass. The color is clear straw to light gold with thicker, meringue-like foam with rocky retention and layers of sticky lacing. It looks phenomenal with the right color for this style – a nice change from the unfortunately ubiquitous amber IPA.

The aroma is assertive and is more springtime smelling with fresh grass and sweet nectary flowers. Warming up, the aroma combines wet dough character with perhaps unintentional savory miso paste. Herbs like rosemary and thyme come through after a good amount of aeration.

The flavor combines fresh sourdough, lemon drop candy, and sweet honeydew in the front palate. Mid-palate brings a moderate grassy hop bite. The finish creates something that reminds me of a dirtier, ale-recipe of Prima Pils. It isn’t as crisp as Prima Pils with the hop bite less sharp and refined. The body feels less put together with mild white alcohol qualities. White grape and lemon drop flavors remind me of Victory’s 20th Anniversary Experimental IPA, though somehow it doesn’t feel as refreshing as that one. The crackery malt base and brightness of the beer in general make it an unmistakable Victory product. Though this one doesn’t blow me away, it is a drastic improvement over the beer it perhaps seeks to replace, Hop Devil. Logically, Vital IPA would work as an excellent counterpart to DirtWolf DIPA as Victory modernizes its core lineup from amber, chewy hop bombs to more drinkable, aroma-focused, blonde, restrained hoppy beers.

Overall: Overall, Vital IPA clearly exhibits Victory’s world-class German malt base but with an end result that is a bit like an unrefined Prima Pils. Sweet lemon candy flavors could easily be substituted for sharper, grassy hop bitterness and an overall drier palate. I liked it, still. Vital IPA proves Victory is heading in the right direction as it modernizes its core lineup.