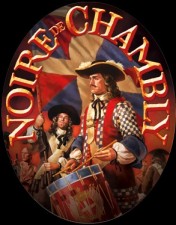 From Unibroue – This dark ale was created in honor of the brave soldiers of the Carignan-Salières Regiment, with their famous black musketeer hats.  In 1665, King Louis XIV sent the regiment to New France to defend against the Iroquois. He had a number of strategic forts, including Fort Chambly, built along the Richelieu River, ensuring peace and prosperity for the colony. Many French Canadians are the direct descendants of these intrepid forebears.

Appearance:  Pours a cola brown with a thin tan ring of bubbles around the perimeter of the glass.

Overall:  I pick up a lot of cherry in this. Not in an obnoxious way either.  Very drinkable.