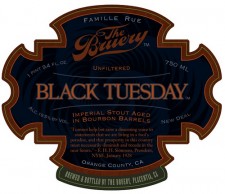 For the 2011 release of Black Tuesday Imperial Stout, The Bruery surprised us with a new variant of the 18% beer. It’s described to us as Black Tuesday with chocolate, roasted marshmallow and graham cracker. We will keep a lookout to see if this beer makes it to the bottle for the 2012 Reserve Society Season or down the road.

Appearance: Pours black with no head and no swirls.