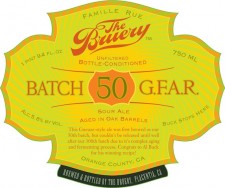 From The Bruery – In January of 2009, a homebrewer and microbiologist named Al Buck won our Batch #50 homebrew contest with his incredibly complex gueuze-style ale. We knew this beer wouldn’t be easy to re-create, but the perfect layers of classic barnyard funk and lactic sourness were impossible to resist. Nearly 3 years later, after brewing the beer once in 2009 and a second batch in 2010, after adding various strains of wild yeasts and bacteria to the barrels and the bottles, after blending multiple batches back together and well beyond our release of Batch #300, we’re finally prepared to release Batch #50 – Grand Funk Aleroad. Brewed in the classic Belgian Gueuze tradition of barrel aging and blending multiple vintages of lambic-style ale, Batch #50 is one of the most rewarding beers we’ve ever had the opportunity to brew.

Appearance: Pours yellow gold with no head. The body is fairly hazy.

Overall: A very sour beer. For the most part I liked it. I have one saved away for a future sour tasting, it will be cool to see where this one goes with some time.