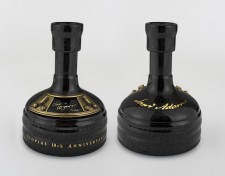 From Boston Beer Co. –  The 2012 batch of Samuel Adams Utopias is a blend of liquids, some of which have been aged in a variety of wood barrels for 19 years. This long aging process enhances the beer’s distinct vanilla and maple notes, and its high alcohol content creates a heated aroma of ginger and cinnamon. After blending, Samuel Adams Utopias is aged in finishing barrels sourced from all over the world.  This year’s batch was finished in single-use bourbon casks from the award-winning Buffalo Trace Distillery to enhance the beer’s distinct vanilla and maple notes. This year’s batch also spent time in a variety of finishing casks: Tawny Port casks and Vintage Ruby Port casks from Portugal and Rum barrels from Nicaragua.

Appearance:  Pours dark red with no head. Light gets through. Looks like syrup.

Overall:  Looking back on my tasting notes from last year, this is very similar to last years batch, at least to my mouth it is.  I wasn’t ready for the heat on this, so it was like taking a sip of room temperature Makers Mark at first.  After the first couple of hot sips and smells, I was able to enjoy the sugary woody complex goodness.  As long as we collectively don’t consider this beer, it’s a fantastic sipping beverage. As for the price, it is very expensive, so this is how I view that aspect: it keeps away the college kids who want to chug it on YouTube, and will help you justify not letting your dinner guests finish it like it’s a bottle of inexpensive whiskey. Pair it with a cigar or some very bitter chocolate.