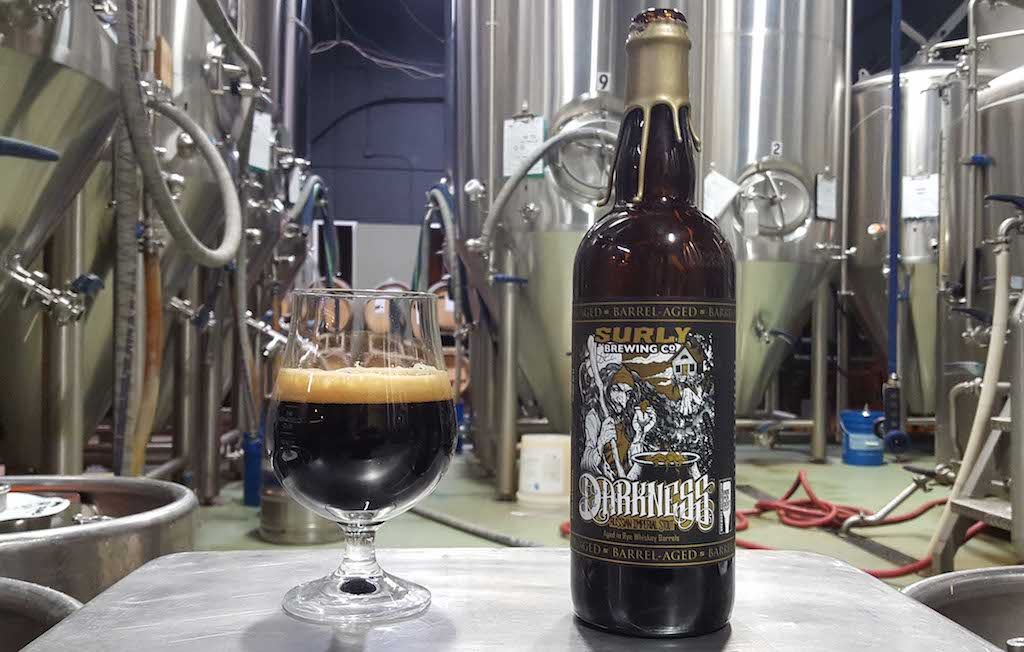 I reviewed the non-barrel-aged 2017 Darkness last year and was impressed. Though the beer is already near perfect, one of my criticisms was that the beer was a bit sweet and not bitter enough. Still, this was a crowd pleaser.

Now we dig into this year’s release of barrel-aged Darkness, which takes that same vintage of 2017 base beer and ages it for three months in Woodford Reserve Rye barrels. My initial impression is that the barrel-aging time is shorter than many other barrel-aged stouts, some of which spend a year in barrels. But that longer period can backfire with possible spoilage, souring, oxidation, and over-leaching of wood tannins.

Out of the bottle, BA Darkness is clear sepia in color looking black in the glass. (There’s no yeast sediment at the bottom of the bottle just for reference.) Head formation is impressive for a barrel-aged beer with thick, tan foam that sticks around for several minutes. The aroma is immediately assertive with a powerful rye whiskey barrel character that I would describe as bananas foster. You get the butter and vanilla from the wood, fumey dark liquor from the whiskey, and caramelized sugar from the base beer. It’s fantastic. Let it warm up a bit, and you can get move past the barrel and get to the base beer, which brings back savory elements of black olive and marmite plus some burnt sugar/molasses.

Flavor-wise, this version fixes the issues I had with the original release, namely, higher sugariness and lower bitterness. Thanks to the barrel-aging, the beer has dried out a bit and the barrel component has added a touch of tannic bitterness. I think the mouthfeel is better as well with a nice interplay between warming alcohol, silky chocolate dessert, and drying woodiness. Though the whiskey barrel boosts ABV from 10% to 12%, the beer is far from boozy and is actually more drinkable and balanced than I remember the base beer being. Overall, the barrel integration here is superb. Though I really like the end result here, I can see some enthusiasts not as happy about the thinner mouthfeel from the reduced sugar content. This is not the big beer you might expect and is firmly dry for the style.

Barrel-aging has really transformed this beer into something else. You aren’t just getting some bonus dark alcohol in the nose and flavor. You are getting a beer that has been fundamentally modified into something I believe is better balanced, drier, and easier to enjoy all while maintaining an excellent creamy mid-palate of dark chocolate and buttercream frosting. Like the regular Darkness, this was a crowd favorite.