Product description: A massive dose of Citra hops launch our legendary double IPA (Minnesota’s first, and a nod to our abrasives factory origin) into the hophead stratosphere. We brewed this beer originally at the end of 2008 as a farewell to growler sales. As usual, we underestimated the demand for the first Double IPA in Minnesota. We brewed the beer again in the spring and released it as a draft only beer. It was originally called 16 Grit, a size of abrasive grit used at the old Abrasive factory that once stood where the original Surly brewery now resides in Brooklyn Center. 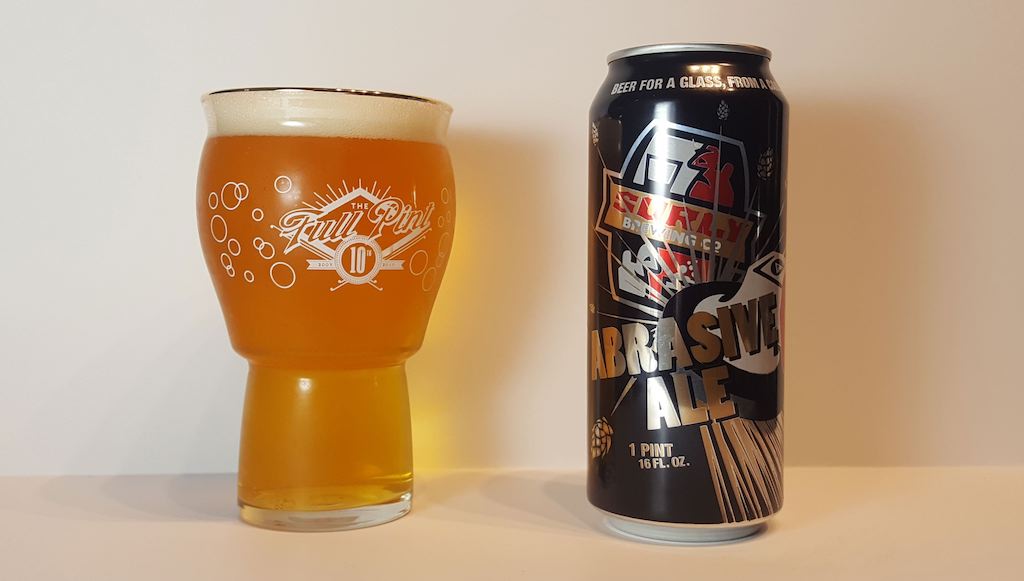 Sampled from a couple of fresh 16oz cans less than 2 weeks old, Abrasive is clear-ish deep golden in color with larger white foam that has poor head retention for style. With my first can sampled, the aroma began with a big whiff of nail polish remover, but it dissipated rapidly to reveal starfruit, chamomile, pineapple, green banana, and then something slightly fusel and boozy like white rum. The second can sampled a few days later was a better experience with the nose beginning with fresh red grapefruit, thick and juicy melon rinds, green banana, and touches of pineapple upside down cake. It was fresh and inviting with the tropical fruit juicy character expected from Citra hops.

Digging in, Abrasive begins with a big wallop of white alcohol, but after an initial slap in the face, you get this powerfully bitter mid-palate that toes the line between overpowering and pure hop-addict bliss. There’s a sharp mango skin and grapefruit peel bitterness to the beer – a fun experience since it is so powerful but never abrasive (ha), astringent, or palate-wrecking. It’s right there at a 9 out of 10 on the bitterness scale and still somehow enjoyable.

The base beer is rich and chewy with mild sugar density, honey rolls, and some silkiness to offset that intense IBU level. The mouthfeel is juicy with great interplay between sweet and bitter with bitterness dominating through the long finish. It’s a great beer overall – complex and well-balanced even for such a monster DIPA.

This beer has been around since 2008, I believe, and it doesn’t seem outdated even with apparently the same recipe. This is a heavy-duty DIPA that nails that difficult to achieve balance between sugar, alcohol, maltiness, and bitterness. Abrasive continues to be a classic example of this style.