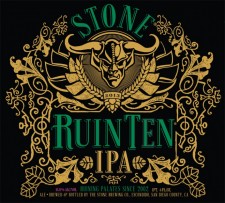 Taste: An abundance of tropical hop flavors upfront and carrying throughout the palate. A pleasant maltiness balances the hops about mid-palate. Finishes with a long, lingering, clean bitterness.

Palate: Full-bodied but dry, with an alcohol fullness and sweetness. Very bitter!

Overall: This was one of the team’s favorite Double IPAs, so we were thrilled to have the opportunity to brew it again. The combination of Citra and Centennial in the dry-hop is magical. Please drink this beer FRESH to get the full impact of the hopping!
Suggested food pairings, provided by “Dr.” Bill Sysak