Product description: From the dark recesses of the brewery, emerges a new, unfiltered IPA brewed with Loral hops. In tribute to the overnight Stone Brew Crew, this canned specialty seasonal makes an ethereal appearance, with a floral, lemony and tropical explosion. The name Stone Ghost Hammer IPA refers to the occasional creaking of the knocking pipes in the brewery, which are especially noticeable during the quieter overnight brewing shifts.

“Our quest for using new and different hops never ends,” says Jeremy Moynier, Senior Innovation Brewing Manager. “Stone Ghost Hammer IPA is our latest beer to highlight innovation in the hop world with a newer hop called Loral, which is named by combining the words ‘lemon’ and ‘floral’ as a nod to the strong lemony notes and its intense floral aroma. Additionally, Loral has some classic European noble hop qualities, making it overall a very unique and exciting hop.” 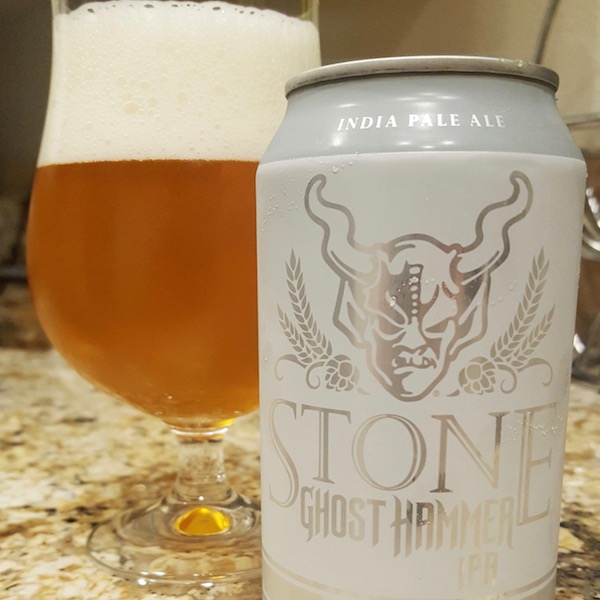 I picked this up at my local for $10 a 6-pack of 12oz cans. Ghost Hammer seems to be an all-new beer from Stone that has wide distribution. In good fashion, Stone has put the canning date as well as the best by date on the bottom of the cans. More importantly, the canning date is clearly visible on the outer paper box packaging. I’m sampling these about three weeks after packaging.

Ghost Hammer is slightly hazy bright golden in color with large, off-white, rocky foam that dwindles out fairly quickly. The aroma on this is really something else: intensely herbal with Earl Grey tea (bergamot oil), jasmine, potpourri, dried lemon, and camphor/menthol. This beer uses a new hop varietal called Loral, which I’m unfamiliar with, but the overall result hints at its European, noble hop heritage. The flavor continues with herbal tea, sharp citrus oils, ending minerally and very dry for an IPA. The mouthfeel does get a bit dusty from being so attenuated, but since bitterness is so low, it doesn’t become harsh or astringent. The overall beer is much lighter-bodied than I expected and given the dryness and herbal hop character, it reminds me of an English pale ale. Likewise, the 6.7% ABV goes unnoticed.

The main takeaway here is that Ghost Hammer is not just a regular Stone IPA dressed up with different hops. This is a new recipe that really showcases this unique hop varietal in an easy drinking, dry, unconventional package.