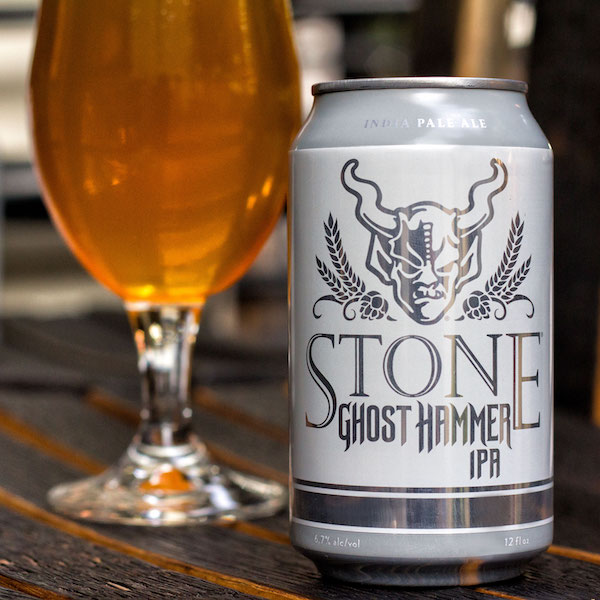 From the dark recessses of the brewery, emerges a new, unfiltered IPA brewed with Loral hops. In tribute to the overnight Stone Brew Crew, this canned specialty seasonal makes an ethereal appearance, with a floral, lemony and tropical explosion. The name Stone Ghost Hammer IPA refers to the occasional creaking of the knocking pipes in the brewery, which are especially noticeable during the quieter overnight brewing shifts.

“Our quest for using new and different hops never ends,” says Jeremy Moynier, Senior Innovation Brewing Manager. “Stone Ghost Hammer IPA is our latest beer to highlight innovation in the hop world with a newer hop called Loral, which is named by combining the words ‘lemon’ and ‘floral’ as a nod to the strong lemony notes and its intense floral aroma. Additionally, Loral has some classic European noble hop qualities, making it overall a very unique and exciting hop.”

With the triumphant return of a fan favorite, clearly the lines have been drawn with this double IPA Imperial Seasonal that combines the uniquely refreshing characteristics of a bright, fruity IPA and satisfying mocha overtones. With deliberate disregard for traditional brewing styles, this revolutionary IPA blurs the lines between an IPA and a stout. Technically an all-out double IPA, this decadent creation is brewed with the combination of golden-roasted coffee, pure dark chocolate and citrusy hops. The result is a love child of a beer characterized by a beautiful meld of imperial IPA and mocha indulgence, brewed with actual cacao, milk sugar and coffee. Vivid burst of fresh, golden-roasted coffee, pure dark chocolate and a barrage of citrusy hops, creates this unconventional and hedonistic delight.

Loud, aggressive, and quite eccentric, this mega-hopped success is not one to hold back. Stone RuinTen Triple IPA earned a rabid following of hopheads clamoring for its return each year. With an avant-garde amplification to the classic Stone Ruination IPA, this triple IPA includes two new ingredients of Orange Peel and Vanilla Bean and to achieve its sweet jam session of flavor. With hops in overdrive, not just in the boil, the result is pure magic.

About Stone Brewing
Founded by Greg Koch and Steve Wagner in 1996, the groundbreaking San Diego-based Stone Brewing is the 9th largest craft brewer in the United States. Recognized as an award-winning, industry leader, Stone has been listed on the Inc. 500 | 5000 Fastest Growing Private Companies list 12 times, has been called the “All-time Top Brewery on Planet Earth” by BeerAdvocate magazine twice. The multifaceted company is the first American craft brewer to independently build, own and operate their own brewery in Europe (Berlin, Germany), and also opened a production brewery in Richmond, Virginia in 2016. Known for its bold, flavorful and largely hop-centric beers, Stone has earned a reputation for brewing outstanding, unique beers while maintaining an unwavering commitment to sustainability, business ethics, philanthropy and the art of brewing…and pledging never, ever, sell out to the man.  For more information on Stone Brewing,  please visit stonebrewing.com or the company’s social media sites: Facebook, Instagram, Pinterest, Twitter and The Stone Blog.