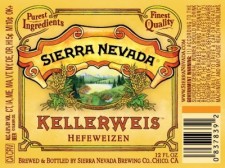 From Sierra Nevada Brewing Co. – Kellerweis is one of the only American Hefeweizens made using the traditional Bavarian style of open fermentation. This difficult and labor-intensive technique adds uncommon depth and flavor complexity. Our hazy-golden hefeweizen is deeply flavorful, refreshing and perfect for a sunny day. To serve, pour two-thirds into a glass, swirl and pour the rest.

Appearance: Pours a pastel yellow gold, with tons of cloudy haze. Even though there is a lot of action going on in the body, the fluffy white head quickly disappears.

Aroma: A little banana and a little breadiness. Nothing overwhelming, but very defined.

Taste: Big mouthful of banana, a little sourish fruity twang, some clove, and finishes with some SN trademark spicy hopiness.

Overall: I love this beer. Anyone who has had a Pyramid or Widmer Hefe, and quickly deemed Wheat/Wit’s not enjoyable, needs to try this beer.