Product Description: Hops are the name of the game with a Double IPA, but we knew we had to take it one step further. With Hop Bullet, we’re using a new technique, hitting the beer with a double-barreled blast of Magnum hops and lupulin dust—pure, concentrated hop flavor—directly into the tank to emphasize the intense pine and citrus flavors of classic West Coast hops. 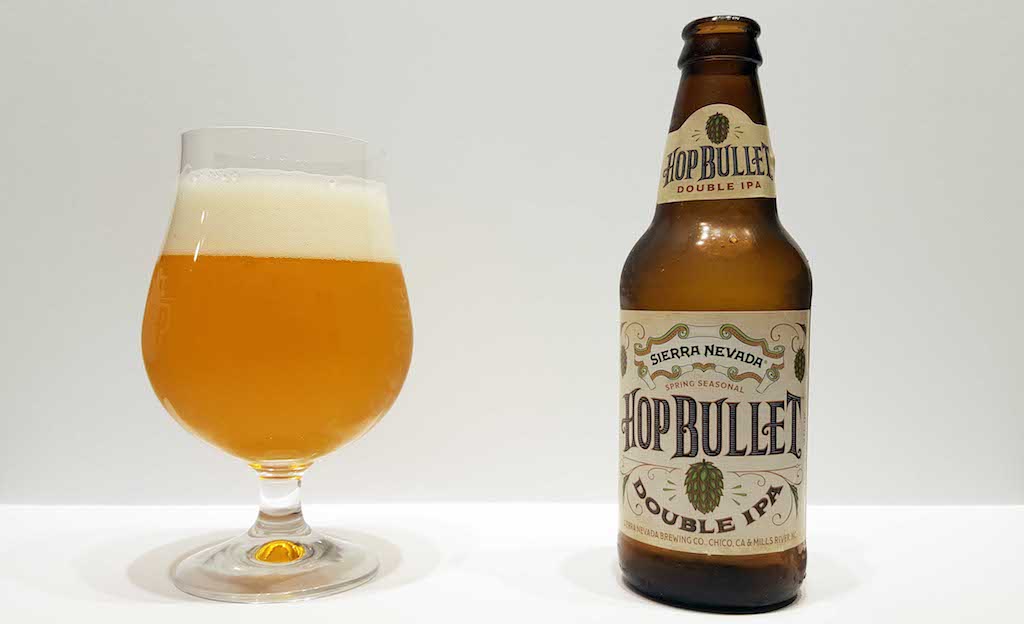 Hop Bullet is a new spring seasonal for Sierra Nevada even though it starting hitting distribution in December of 2017. Similar to the Ninkasi Prismatic I recently reviewed, this beer uses something identical to cryo hops, lupulin powder. On the bottle, it’s labeled as a Double IPA in large font. But this is right at 8% ABV, which in my opinion is that line between regular strength IPA and Double IPA. I was curious, then, how Sierra Nevada integrated this into their lineup. Their biggest IPA, Hoptimum, is now billed as a Triple IPA at 9.6% after previously being labeled as just an Imperial IPA. And then right below Hop Bullet is Torpedo Extra at 7.2%. It’s a pretty narrow band there.

I’m sampling this from a 12 oz bottle packaged on 1/2/18 picked up at Trader Joe’s, which is notorious for not refrigerating any beer. But with Sierra Nevada’s best in the business shelf life, it shouldn’t be an issue. Let’s put this one to the test.

Hop Bullet is outstanding immediately. The beer has some chill haze right after pouring that clears up to a crystal clear, bright orange-gold color with thick white foam that towers nearly over the rim of the tulip hybrid glass. Volatile hop oil aromas kick it all off with fresh grapefruit, zesty lime, and super bright citrus peel. The lupulin powder does wonders with that fresh lime character moving to something more exotic like Buddha’s Hand citron or yuzu. It’s amazing – a 10 out of 10 for me. As the beer warms up and aerates, the hop aromas give way to the underlying base beer with fresh sourdough and homemade cornbread.

After the first sip, my first impression is that this beer is way too easy to drink. Like I said above, the ABV places this just barely in Double IPA territory. Flavors begin with sourdough bread crust met with bright lime and fresh, pulpy white grapefruit. Bitterness is at a 7 out of 10 I’d say. The mid-palate is silky and rich with bready pale malt dominating. The mouthfeel is phenomenal – again 10 out 10. In the finish, there’s no punishing or lingering bitterness. Instead, you get crackery and doughy malt with a cream of wheat character. Sierra Nevada must have some in-house magic with their grain bills. That house malt character is what makes their beers so superlative in my opinion.

Overall, this beer was perfect. It’s much too easy to drink and hits top marks for every category. I think it’s a great addition to the SN lineup as Hoptimum is a bit too boozy for me while Torpedo Extra is not as brightly aromatic or soft-bodied. This is a beer you don’t want to miss.