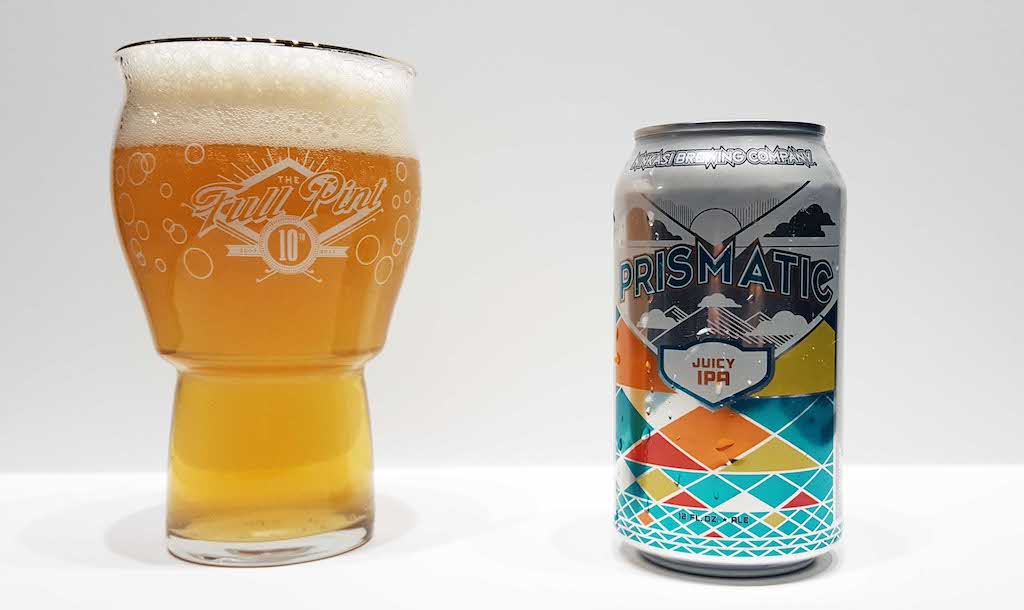 At the beginning of this year, Prismatic joined Ninkasi’s core lineup of nine beers and is even the top-billed beer overall on their website. It competes in the toughest and most prolific craft beer segment right now, canned IPAs. Not only that, but Prismatic takes a stab at the hazy IPA fad. Though you’ll only see “Juicy IPA” on the label, this beer is made with white wheat and flaked barley for extra haze and only has 36 IBUs in keeping with the trend of lower bitterness and insane hop aroma. For bitterness, Prismatic uses El Dorado, Centennial, Simcoe, and Citra hops. Then for aroma, Mosaic and Simcoe Cryo Hops. For those unfamiliar with the term, Cryo Hops are the concentrated lupulin powder separated from the hop itself through freezing with liquid nitrogen. The powder contains all the best hop oils and resins without the vegetal tasting mass of the hop cone and leaves. Some breweries local to me like Burgeon Beer Co. have been using these with great results. So let’s dig in!

I’m sampling this from a 12 oz can with best by date of 3/14/18. I’m loving the graphic design, and though you can’t see it in the picture, this can has a turquoise tab, which I love. Into the glass, Prismatic is slightly hazy and deep golden in color. You get off-white, large-bubbled foam that dissipates quicker than I like to see in a hoppy style. Right away, this beer does not look like the murky NE-Style IPAs that are the current fad right now.

On to the aroma. Given the beer’s description and recipe, I’m expecting this super tropical, hop-forward nose. Instead, it’s very doughy with a neutral grain character. The flavor is similar to an American wheat ale or honey blonde with flavors of bread rolls, thicker grains, and sourdough. It is sweeter overall (medium-bodied) with a soft water profile. And the wheat addition gives it some nice creaminess to the mouthfeel. But the hop character is non-existent. Sure, bitterness is expected to be lower in these hazy IPAs, but certainly not dialed down to zero. All the fancy hops mentioned in the recipe are totally lost on me. Juicy is not a descriptor that comes to mind at any point.

I had my wife try this blind for a second opinion. I didn’t tell her anything about the beer nor did I say if I liked it or not. She thought it was a pilsner or blonde/golden ale with a chewy grain character and dough flavor dominating the aroma and flavor. We both liked the beer, however. It is technically flawless and very drinkable with excellent mouthfeel. That’s all great, it’s just not an IPA.

In a similar conclusion to my reviews for Sierra Nevada Hazy Little Thing and New Belgium Voodoo Ranger Juicy Haze, it remains to be seen if you can mass produce and distribute these NE-Style IPAs long distance and have them hold up on store shelves. For now, it seems like this style of beer we are all crazy for is best on tap at your local brewery.