Product description: We’ve partnered with Bavaria’s Weihenstephan, the world’s oldest brewery, for this American take on the classic German Oktoberfest. A malt backbone is balanced by subtle hop character in this crisp, clean, and drinkable crowd-pleaser. Nothing captures the spirit of celebration like a beer among friends. 20 IBUs, 6% ABV. 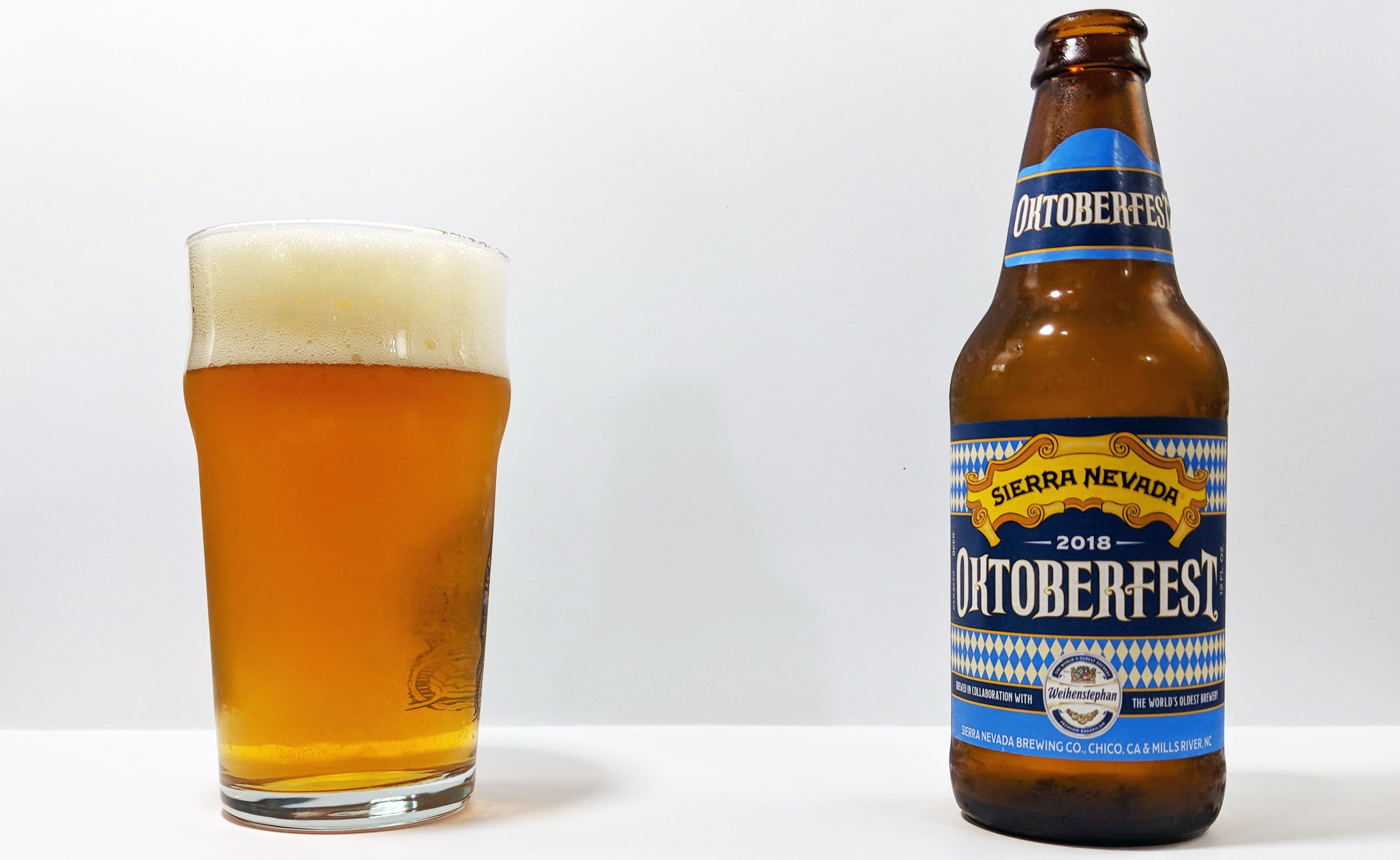 Each year since 2015, Sierra Nevada has collaborated with a different German craft brewery on their Oktoberfest seasonal. This year, SN teamed up with Bayerische Staatsbrauerei Weihenstephan, the world’s oldest brewery. You may recognize the name from their ubiquitous Weihenstephaner Hefeweissbier. Earlier this year, Weihenstephan collaborated with Sierra Nevada for a modern spin on the traditional hefeweizen with Braupakt, a beer I recently reviewed and loved.

Since each year’s Oktoberfest is now slightly different, it’s hard to know what to expect from this 2018 version. But since these two breweries are arguably the most consistently good larger craft breweries on the planet, it’s fair to expect something spectacular. From a 12oz bottle, this year’s Oktoberfest is crystal clear amber in color with roaring carbonation that generates a thick, yellowish head of sea foam-textured bubbles. You get a relatively muted aroma that reminds me of apple pie complete with cinnamon and buttery crust. Digging in, malty flavors take up about 95% of the experience. This beer is rich in mouthfeel with a silky smooth texture that glides across the palate with freshly baked honey rolls at the center combined with cinnamon, sugar, and red apple spattered around the edges. Mild tea and just a touch of tannic apple skin provide an odd balance, but I’ll take it. Bitterness is at a 1 out of 10 while sweetness is at a 5/10, which may be a strange combination for those used to Sierra Nevada Pale Ale. In the finish, Oktoberfest is incredibly oily and fatty in texture with just a touch of paper to give it a less than stellar finale. Still, there’s no residual sugar lingering in the aftertaste and the overall experience is similar to a sweeter helles lager. After several minutes, the beer leaves a nice sourdough bread flavor in the mouth.

Overall, this year’s Oktoberfest is a straightforward exercise in the quenching ability of amber lager. If anything, this beer is drinkable with a phenomenal palate and flavors that aren’t too robust as to overwhelm the beer fest attendee drinking this by the liter. It’s a true festbier based on mid-tier alcohol strength, very low bitterness, and relatively moderate sugar. It’s a difficult style to perfect, but this year’s version gets the job done. In my opinion, this epic tag team hasn’t created what I would call a show-stopping version of an Oktoberfest. I was much more impressed with Braupakt, though that was an estery wheat ale and not an amber lager. Just out of curiosity, I decided to sample Sierra Nevada and Weihenstephan’s version alongside German competitor Ayinger, who produces the classic Oktober Fest-Märzen. In comparison, Ayinger’s version was much less impressive. It lacked the beautiful malt backbone and fell into a spiral of sticky sweetness and become way too cidery over time as red apple flavors dominated to the point of a fault for this style. In other words, though this year’s SN Oktoberfest isn’t very exciting, it is about as close to perfect as this style gets – easily besting other classic German examples.