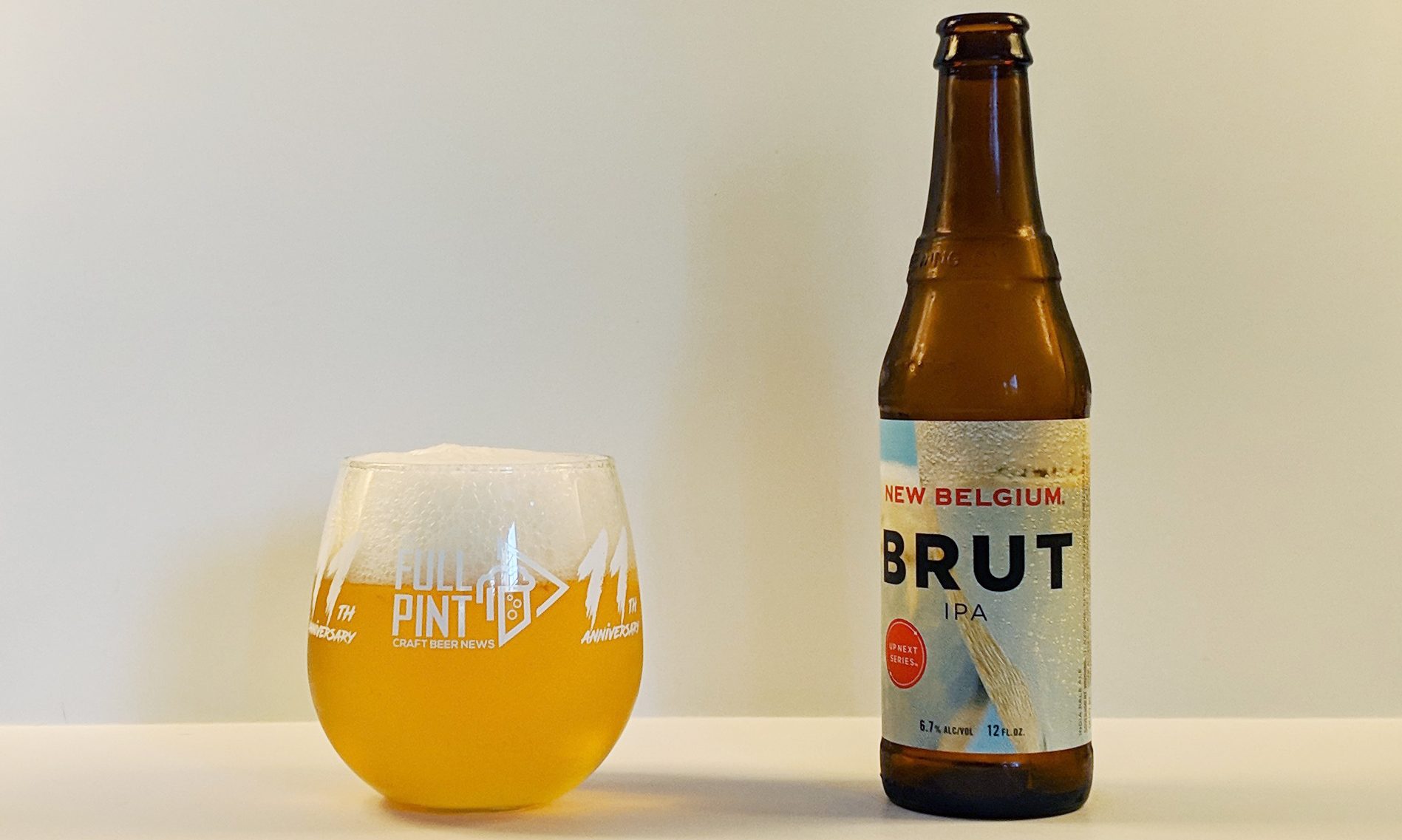 I’ve avoided Brut IPAs due to my concern that super dry and super bitter don’t mix well – at least from my experience. Brut IPA, like its Belgian IPA predecessors, highlights dryness, forceful carbonation, brilliant clarity, stinging bitterness, and simply drops out the estery, peppery Belgian yeast aspect. (Although some breweries have tried to pass off Belgian IPAs as Brut IPAs to capitalize on the hype). Think of Brut IPA as the equal and opposite reaction to hazy IPAs, which pride themselves on unfinished fermentation, a murky appearance, huge sugar, and low bitterness.

I’ve only formally reviewed one Brut IPA thus far, but since that review, I’ve had several others. I’m starting to get a feel for this new style, but I’ve yet to find one that I enjoyed. Maybe New Belgium’s will be the one!

Into the glass, New Belgium’s latest offering is mostly clear pale straw in color with large-bubbled, bright white foam that rises up out of the glass and sticks around for several minutes. A meringue-like head of foam settles down slowly and leaves behind large patterns of lace on the glass. This is one impressive looking beer!

Dive in and there’s an immediate wallop of intense aromatic hops that screams Citra to me. It’s seriously impressive with some of the best hop notes you can ask for: lemon balm, candied lime, ripe papaya, gooseberry, white grape…it’s phenomenal. I went into this beer having not read the recipe, so this was a big surprise. Looking up the specs, New Belgium’s Brut IPA uses some of my absolute favorite hop varietals like Citra and Hull Melon.

After a few large gulps…oh wow! This Brut IPA ticks all the boxes for modern, cutting-edge IPA. (I’m even not talking about Brut IPA but rather IPA in general.) It’s bright, super clean, utilizes zero specialty malt, and produces such a quenching, vibrant beer that seems to have been materialized from a dream of mine. Pale and pilsner malt only generate this fresh, fluffy biscuit base flavor. Carbonation is powerful providing an aerated mouthfeel. There’s also some saltiness to the beer that gives it buoyancy and bolsters its refreshing nature.

Overall sweetness is not as low as I was expecting. Some of these Brut IPAs have no sugar/body left at all, leaving your palate to grapple with punishing bitterness unaided. New Belgium’s take is still balanced at its core with sweetness at a 4/10 with an obvious backbone of bready pale and pilsner malt. Bitterness is what makes this beer so much fun. Vibrant white grapefruit rind pushes bitterness to a peak of 7/10 with a lingering, powerful effect that lasts well into the finish. It’s not overdone like some other dry or super-dry IPAs I’ve had recently. If this was presented to me as the latest APA or IPA from one of my favorite Southern California breweries, I would not bat an eye. “Brut IPA” as a moniker is only on the table because New Belgium says so. As far as I’m concerned, every IPA should be like this.

This may be my favorite beer I’ve ever had from New Belgium. It’s bright and quenching but still malty and substantial, dry but not chalky or wooly, and bitter but not abrasive. The color, carbonation, and aroma hops are perfect. The recipe is almost too good to be true: mid-range alcohol, mid-range bitterness, pale and pilsner malt only, and a mix of some of the best if not the best modern hop varietals available today. I’ve been reticent towards the entire Brut IPA craze, but New Belgium has me doing a 180. I’m a believer. Keep them coming!