Product description: We brewed this for the 31st anniversary of the world famous Toronado beer bar in San Francisco. We went kind of went overboard with the idea of making an ice cream inspired fruited vanilla Ice Cream Stout by creating the most expensive beer we have made to date. First, we started with an Imperial Milk Stout then treated it by adding an insane amount of raspberries at the amount of 3 pounds per gallon. After the refermentation was finished we treated it with a couple hundred vanilla beans to give it that creamy aftertaste. The ending result is a slightly tart, fruit dominated beer with aftertastes of stout and vanilla. [Back label: Contains lactose.] 10.3% ABV. 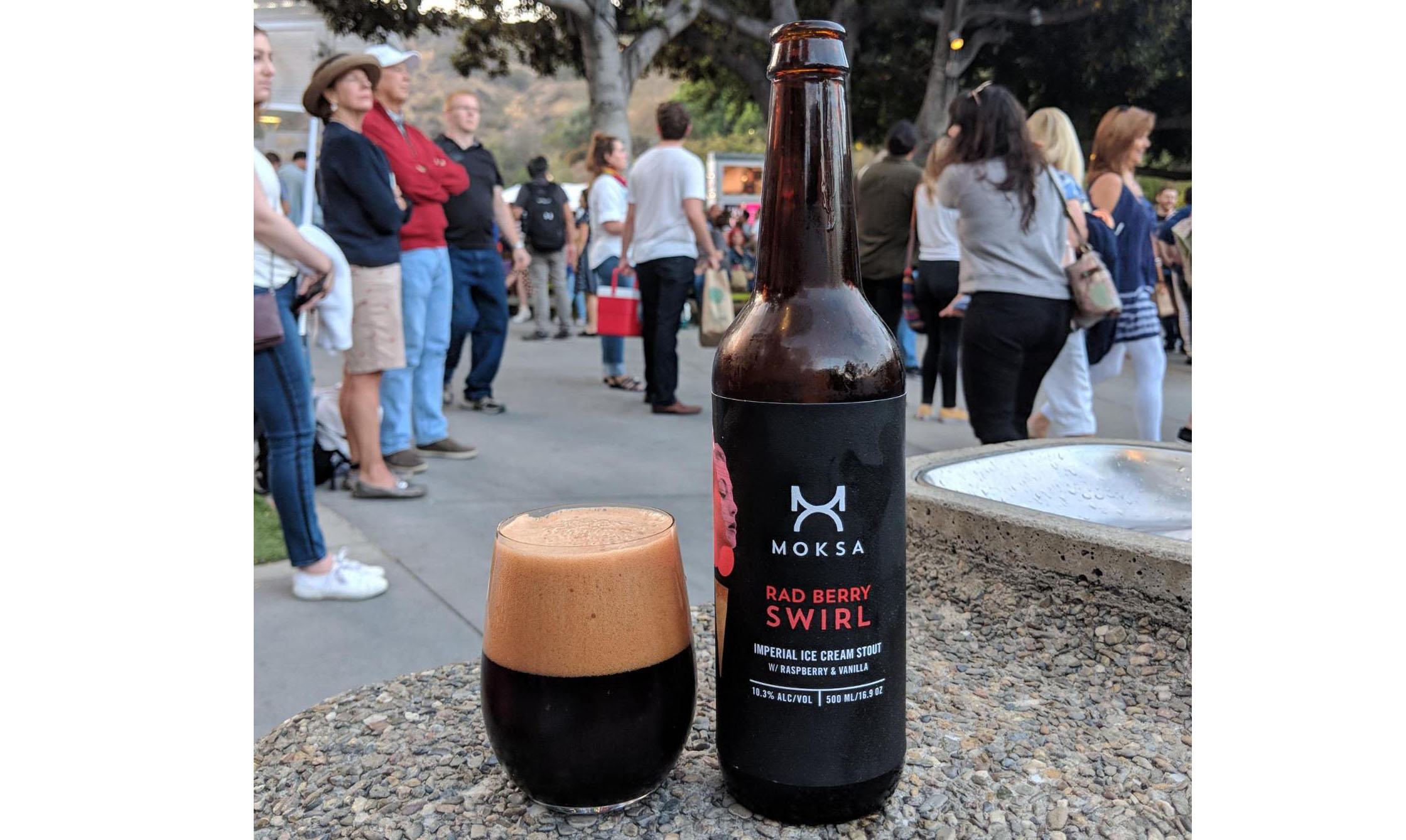 What exactly is an ice cream stout? We’re here to find out.

Rad Berry Swirl is ink black going into the glass and generates a towering, mocha-colored head of foam that has just the tiniest pink tinge to it. Head retention is quite amazing – sticking around at the level shown above for several minutes. The aroma is not too interesting – heavy duty roasted malt is front and center with touches of vanilla and tootsie roll. I’m not sure to expect from this beer.

Dig in and this beer is bursting with fresh raspberry juice with the very first sip. The level of raspberry in this beer is unreal. Whatever you think constitutes a raspberry beer, even a raspberry sour ale – imagine that flavor multiplied by ten. There’s so much fresh raspberry juice that even the enormous base beer plays second fiddle. You could almost call this a sour stout given the amount of tart fruit juice, though Rad Berry Swirl is missing the extra oddities from sour stouts like Jolly Pumpkin’s Madrugada Obscura where balancing sugar is absent and the finish is too thin and dry. Rad Berry Swirl is still a big beer at its heart and there’s nothing sour or funky about the fermentation profile. This is a clean-fermented, imperial milk stout with an epic ton of raspberry juice added. Rad Berry Swirl achieves this incredible flavor mix of dark chocolate raspberry sorbet – something I’ve never experienced in a beer before.

Far from overtaking the beer, the tart fruit juice is exactly what is needed to help balance out what would perhaps be a sticky, sweet beer as a standalone. The “ice cream stout” moniker comes from precisely the lactose sugar and the vanilla bean additions, two surefire ways in my experience to piece together an overly sweet, cloying mess. But as I found with Moksa’s The Lush, even a decadent “pastry stout” recipe such as that was executed with tremendous attention to balance. Rad Berry Swirl is no exception. By most accounts, this beer should be a flop – a 10% milk stout with vanilla and raspberries added? It’s a recipe for disaster. And yet somehow, Moksa pulls it off with aplomb. The mid-palate is firmly bitter and the finish surprisingly semi-dry with a creamy, rich mouthfeel throughout and never any sticky sweetness. The high ABV is nicely masked like you find with big, balanced stouts like Bell’s Expedition where background hoppiness and decadent body take control away from the alcohol.

If anything, Rad Berry Swirl is a fun beer that pushes the envelope on flavor intensity. In the same way that J. Wakefield’s beers struck a chord with hardcore beer enthusiasts for bringing incredible new flavors to the craft beer scene, I see that same cutting-edge passion in this beer from Moksa. It’s not a beer that I adore for its perfection and grace like The Lush, but rather I adore it for being unique and showing that you can indeed make these crazy dessert stouts taste delicious without being pure sugar. This is still a nicely balanced stout at its core, which is a feat in and of itself.