Product description: We started by maxing out our mash tun with grain then boiling the wort for 4 hours. Then after fermentation, we hand toasted 6 lbs/bbl worth of pecans and ran the beer through it alongside a couple hundred vanilla beans and 2 lbs/bbl of cacao nibs for multiple days. The result is a chocolate dipped praline inspired Imperial Stout whose tasting experience starts with a slight punch of vanilla and ends with a lingering flavor of toasted pecans. 11% ABV. 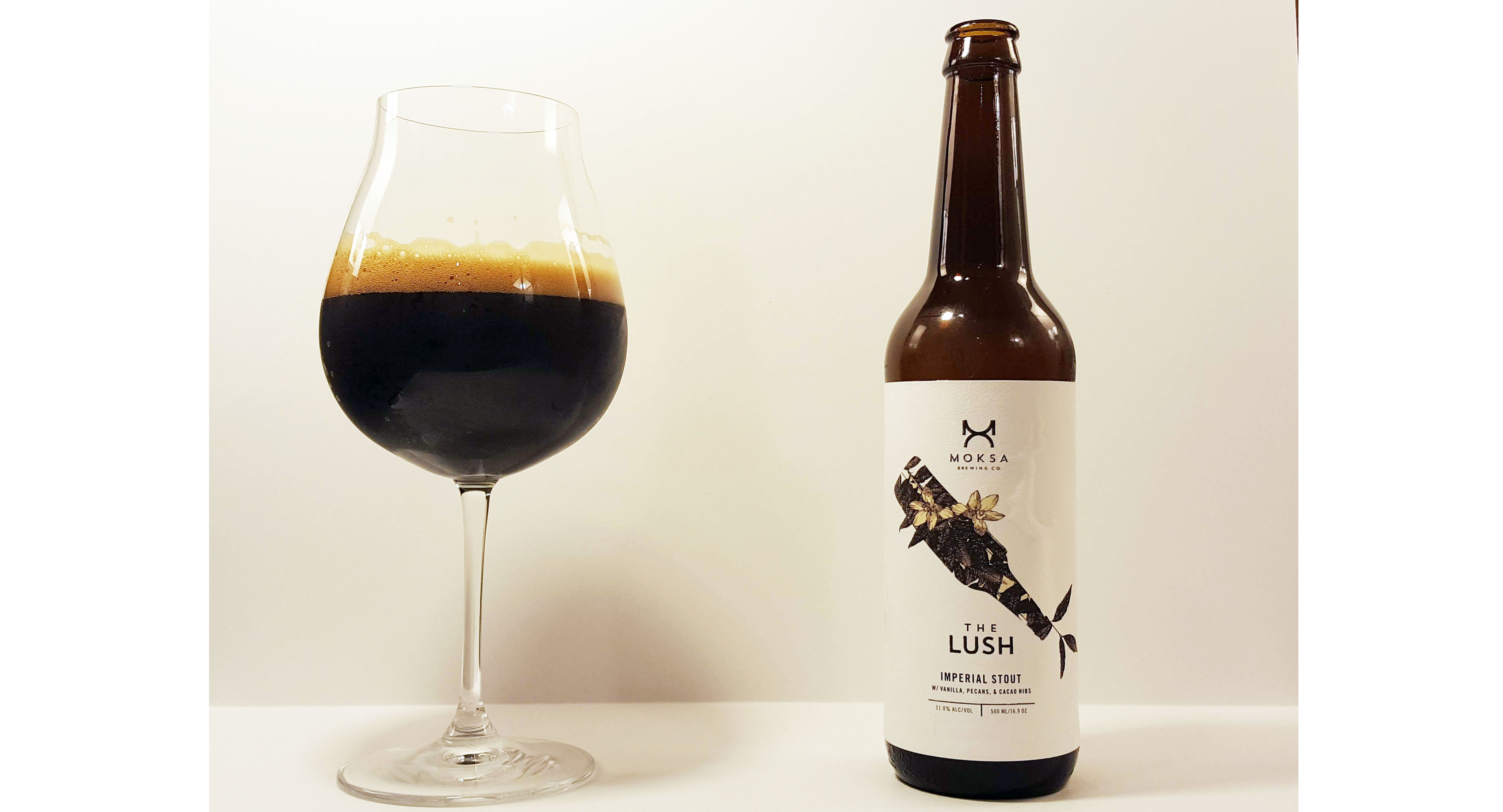 This is the first beer I’ve reviewed from Moksa Brewing (Rocklin, CA), Derek Gallanosa’s newest project after leaving Abnormal Beer Co. in San Diego. For more information about the brewery, check out our podcast here. In short, Derek’s imperial stouts won him fame and adoration over at Abnormal. Those beers I was able to try in the past and walked away impressed. How do they fare coming out of Moksa? Let’s find out.

Sampled from a 500mL bottle into wine stemware, The Lush is ink black-colored with thick mocha foam that sticks around for several minutes and leaves swathes of sticky lacing all over the edges of the glass. Initially, the aroma is muted with black olive, tar, and semisweet chocolate poking through. But as this beer opens up, you get blackberries, graham cracker, toasted marshmallow, and fresh cinnamon roll with vanilla frosting. It’s inviting and multidimensional.

With just a few sips, the first thing that strikes me is that this is not a sweet beer at all. I was expecting a big, boozy beer with vanilla extract flavors. The Lush is a huge beer, don’t get me wrong, but sweetness is nicely moderated to a 6/10 level while overall bitterness is surprisingly high at an 8/10 similar to classic imperial stouts like Bell’s Expedition. Hefty background bitterness is perhaps bolstered by the cacao nibs and pecans addition, which gives the beer a tannic structure similar to Cabernet wine. Add dark berry flavors into the mix like blueberry and blackberry, and you have this wonderful symphony that seems to side skirt the typical flavor profile of these “pastry stouts” such as chocolate chip cookie or pecan pie. Waxy 80% cacao dark chocolate bar dominates throughout and only once the beer has reached room temperature do you finally get some pecan brownie flavors.

The mouthfeel throughout is perfect for this style. It’s incredibly viscous, dense, oily, and coating on the palate. It glides from beginning to end with enough sweetness for body, but it stands apart thanks to heavy-duty bitterness and tannin-like balance. It’s difficult for me to pull out the pecan, vanilla, and cacao nib additions by name. But I think that is a big plus side to this beer: the perfect integration of these adjuncts. Even into its surprisingly dry finish, The Lush never lets the 11% take control and devolve into a boozy mess. It keeps its composure until the very end.

The sugar and vanilla flavors were more intense for my wife, who sampled this along with me. She thought the beer was too sweet overall. I was even expecting this to be sticky and overdone with vanilla flavors taking control. Nine times out of ten, I would prefer beers would skip the vanilla and other additives. However, The Lush is a perfect imperial stout in my opinion. The special ingredients simply bring the beer up to this level rather than make it about themselves. There’s so much to appreciate in the details here especially in mouthfeel, balance, and bitterness. I think hardcore enthusiasts, as well as casual dark beer lovers, will find The Lush to be everything they’ve dreamed of and more.