Product description: Our creative juices have been flowing to pull together this rich, but mellow blend of flavors together. Drinking this beer will add a cherry to the top of a great evening. Bourbon barrel aged with cherry and vanilla. 9.2% ABV. 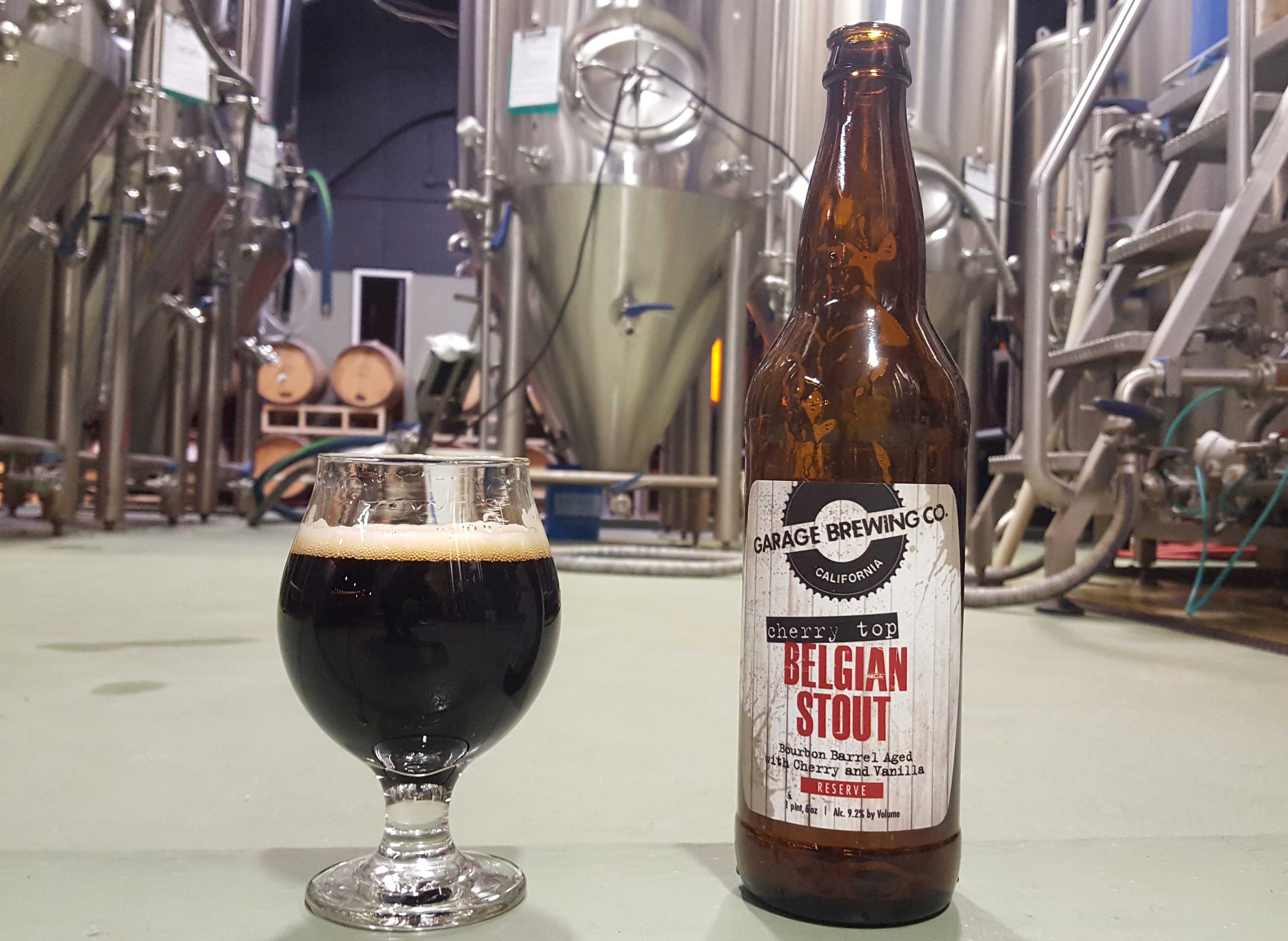 Garage Brewing (Temecula, CA) has really stepped up their game recently with wider distribution, 6-packs of 12oz cans hitting store shelves, and some seriously underrated beer quality. Though open since 2013, it wasn’t until recently that I had the opportunity to sample their current lineup, and I walked away very impressed. That lineup has a familiar ring to it with a regular IPA, Hatch Chile IPA, Citrus IPA, Tropical IPA, Mango Hefeweizen, Apricot Wit, Belgian tripel, coffee stout… I see a heavy influence from Ballast Point. But there was at least one beer I tried that was decidedly different from anything else available in the marketplace, their cherry Belgian stout.

From a 22oz bomber, this beer looks black once in the glass with red highlights and modest, cola-like foam. The aroma is dominated by the bourbon barrel treatment with dark alcohol and vanilla. It’s assertive but soft and inviting. Dig in, and this beer is the opposite of what I was expecting. There’s dark cherry but also way more acidity that I would have guessed. That mix of citric acid, barrel tannins, and dark fruits like black cherry and blackberry gives it a Cabernet Sauvignon character. Thanks to the acid and high attenuation, the body is also very light and continues a vinous theme. The closest beer style in my opinion is oud bruin, a Flemish-style dark sour. Though vanilla is listed as an adjunct, it comes through for me only in the aroma. That’s a good thing because it would not meld well with the current flavor medley in my opinion.

So despite the crazy recipe on the label and big ABV, Cherry Top ends up being a more elegant experience with an impressive vinous character/oud bruin affinity. It’s a fun beer to share with a group as the aroma doesn’t match the flavor at all sending people back in their chair in disbelief. I had the pleasure of sampling this with my regular tasting crowd. It was unanimously puzzling but also thoroughly enjoyed.

The closest thing to Cherry Top that I can think of (that is available in stores) would be Jolly Pumpkin’s Madrugada Obscura, which is both roastier and more acidic. That gives the Garage beer an edge as you get a bit more balance plus the nice bourbon barrel aroma. Of course, the obvious comparison is Bell’s Cherry Stout. But that beer I would never consider a dark sour ale. It is foremost a stout with a more expressive cherry character. Plus, the lower ABV and 6-pack format make it more of a regular drinking beer than a special occasion beer.

You can find Garage Brewing beers distributed across LA and San Diego as well at their brewpub and pizzeria in Temecula.