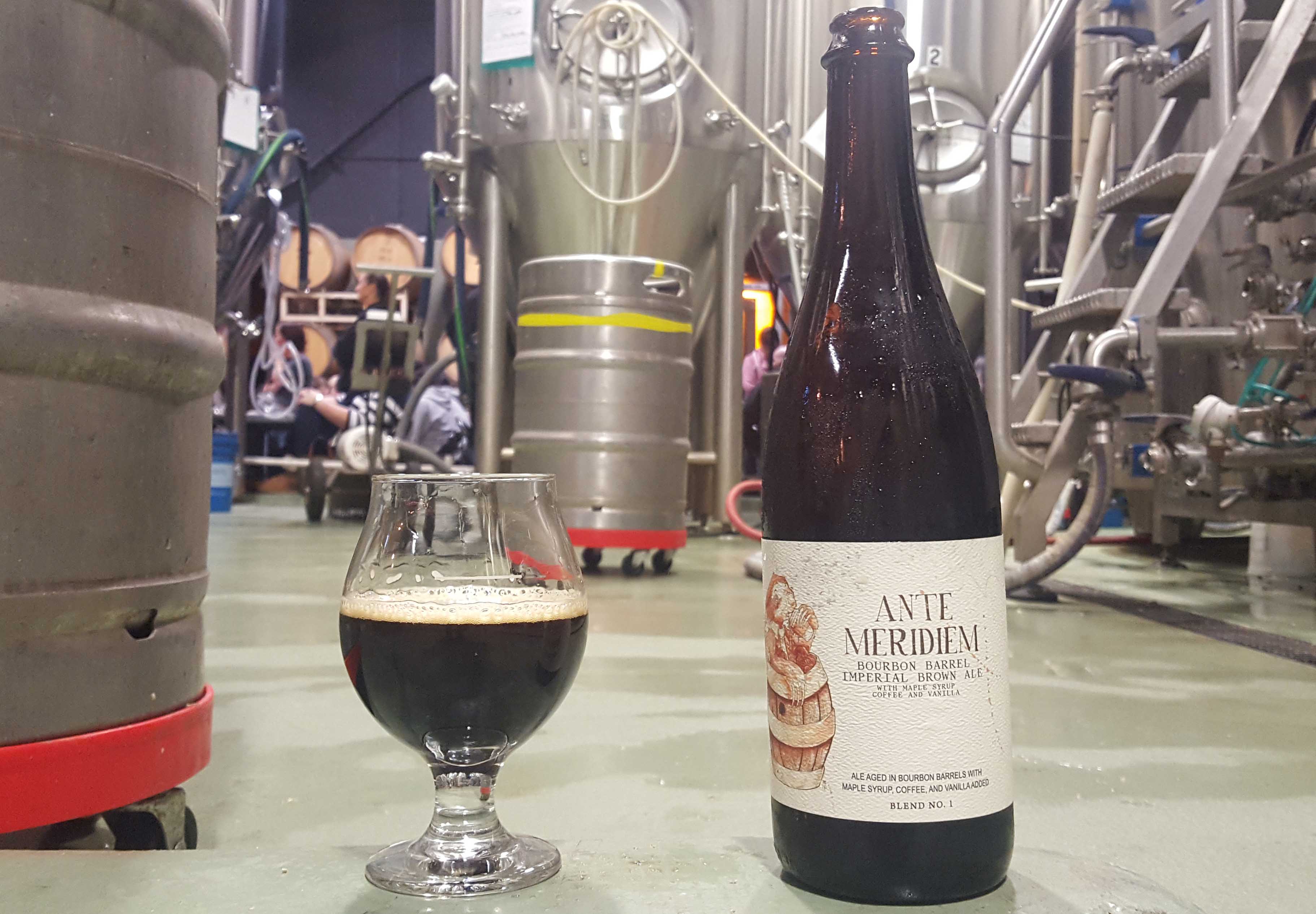 Earlier this year, I was able to try a few beers from Monday Night’s (Atlanta, GA) 12oz can lineup, all of which were fairly impressive. (This is a new brewery for me so I’m just getting acquainted with their beer.) Ante Meridiem is part of their special release Garage Series, which includes some crazier recipes in upscale packaging: large-format bottles with textured, matte paper labels. At first glance, they don’t even look like Monday Night products with the brewery name in tiny font on the side of the label.

From a 750mL bottle, Ante Meridiem is black looking in the glass with deep maroon highlights on the edges. There’s decent head formation that settles down quickly to just a layer of tan bubbles. The aroma is fumy dark alcohol up front with Frangelico (hazelnut) liqueur morphing into dark cherry and blackberry. The dark berries, in turn, bring out high-quality coffee. As it warms up, the nose becomes smoky, savory, and continues to bring a mix of dark alcohol and powerful coffee. It’s seriously impressive. As far as vanilla and maple go, I think you have to dig a little too deep for those.

Flavor-wise, Ante Meridiem is not nearly as sweet or boozy as I would imagine from the specs. The vanilla and maple adjuncts are almost completely muted here, which is great because I think they would distract from what is a very nice bourbon barrel coffee stout at the core. Of course, this is marketed as an imperial brown ale, but in my opinion, it gravitates more towards imperial stout with bitter, roasty coffee flavors dominating. Sweet dessert flavors of vanilla and maple still don’t emerge for me. I had about six others sample this with me blind (I did not tell them the name or style of the beer), and everyone thought it was a bourbon barrel coffee stout. Those are simply the two things that stand out the most.

What I like about Ante Meridiem is that the beer is somewhat dry and not syrupy or sweet at all. Even with this mega recipe, the beer has attenuated fairly well leaving little sugar behind, which gives it a lighter to medium body. The coffee addition even adds a good amount of acidity, which lingers well into the finish. The final result is a beer that is surprisingly balanced and easy to enjoy. But given the monster ABV, I would recommend sharing it with a group. I should probably mention, then, that it unanimously received high marks from our panel. Well done!