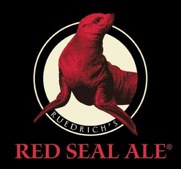 Earlier this month, I reviewed arguably one of the best strong ales, North Coast’s Old Stock Ale.  A trait of many west coast brewers is to have a burst of hop flavor, whether it be a Pale Ale, India Pale Ale, or Imperial India Pale Ale.  At Trader Joes, I found a six pack of North Coast Red Seal Ale (Actually it says Ruedrich’s Red Seal Ale) for a modest $6.49 a sixer.

If you enjoy Sierra Nevada Pale Ale, you will like it a tad more or less.  There is a goofy website that calls this an Amber Ale, but for the love of god, all you have to do is smell it to know. Amateurs!

Appearance: A orange copper with a cream colored off white head.  Even after the aggressive pour head subsides, you are left with a nice 1/4 inch creamy head. Active carbonation dances to the top, and you can make out objects through the glass.

Taste: Like the aroma, malt, then bitter piney hops. A notch maltier than the American Classic, Sierra Nevada Pale Ale.

Mouthfeel: Creamy and sugary, then puckering due to the hops.

Overall: A great drinker that could use more press.  I would hope if it gained more note, it wouldn’t go up in price.  I like California Pale Ales, I like seals, and I like North Coast.  As mentioned, look for this in a Trader Joes if you are on the west coast, this is quite a good deal for such a premium beer.  The main differences between this and Sierra Nevada is this is a bit more sticky and sweet.