Product description: Pizza Port and Noble Ale Works have come up with a dual collaboration IPA recipe, done two ways. Pizza Port’s take on the beer is called Light House and is a West Coast Style IPA. Noble Ale Works’ take is a hazy style of the same recipe. 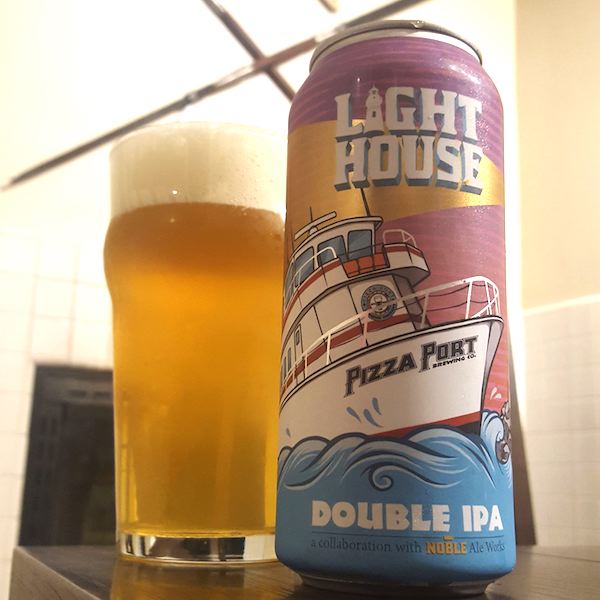 I picked up a six pack of this at Pizza Port San Clemente the day it was released ($20 for x6 16oz cans). And wow – I’ve never seen Pizza Port beer fly out of the cooler at such a fast rate. It was sold out around 3 in the afternoon. I’ve never even seen a Pizza Port canned release sell out. For this special collaboration, Light House gets a novel can design, which is breathtaking compared to the regular Pizza Port lineup. It’s more modern, colorful, and energetic. The end result is without a doubt the most beautiful looking can Pizza Port has produced.

Well, the secret is out and everyone heard that this beer was going to rock. And it does. Before we splash into Light House, I want to talk about its counterpart beer released on tap the same day, Fog Horn IPA. This is not just the same recipe brewed at Noble instead of Pizza Port. It’s the hazy version of Light House. Obviously there’s a pun in there, hazy = fog, clear = light… Fog Horn was also released in similar looking 16oz cans at Noble. From a 16oz tap pour, Fog Horn is translucent, glowing straw with billowing white foam. The nose on this was 100% sticky, overripe yellow mango pulp. The flavor was juicy and refreshing with mango and pineapple coupled with low bitterness and medium sugar. In true hazy IPA fashion, late addition hops dominate while the “unfinished” character of the beer gives it a chalky, mineral-heavy mouthfeel. It was crushable and top-notch in the A+ category. However, the Light House is even better.

From the 16oz can, Light House is clearish bright straw in color with exquisite foam that persists for several minutes. The aroma is brilliant starfruit, red mango, papaya, Mandarin orange, sweet Hawaiian rolls, and sugary orange Tang powder. The flavor begins with some sugar and a flash of white alcohol. The mid-palate is exquisite with tropical fruit juice medley and sharp red grapefruit. But it isn’t overly aggressive like most Double IPAs and it has such a silky near oily mouthfeel for superb balance. The finish is super abrupt for this style with no lingering bitterness. This just brings out the best hop flavors you can imagine in a vehicle these two breweries have perfected. That dense, chewy malt base that Pizza Port is known for is dialed back just a bit to give the beer a more refreshing quality and lightness that is atypical. There’s more sugar in suspension than Pizza Port usually leaves behind, which gives it better balance and drinkability over their regular lineup. Though the tropical hop character is perhaps not as powerful as in the Fog Horn, Light House is better constructed with a cleaner, crisper mouthfeel that creates a more complete overall beer experience.

Light House is in the world-class bracket for Double IPA. It drinks like a regular IPA with the upped ABV bringing some body and power to the experience but there is no booziness or distracting white alcohol bite. This is scarily good reminding me why IPA is the most popular craft beer style. Because almost nothing else on earth can taste this good. Light House is probably the best Double IPA I’ve had in several years. Please make it again.