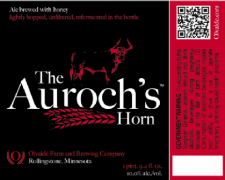 From Ovalde’s Farm – The Auroch’s Horn is a modern reinterpretation of ancient ale brewed throughout Europe more than two thousand years ago. Ale was a staple of the barbarian diet, with Roman historians documenting a beverage made with barley, wheat, and honey in Britannia, Gaul, and Germania. The ale was consumed from the horn of the auroch (or aurochs), a now extinct wild bull.

Appearance:  Pours a bright amber gold with a white ring.

Overall: Very tasty, perfectly balanced for such a big beer.