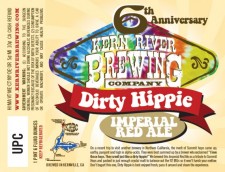 From Kern River – So, we have a new beer; an Imperial Red Ale dry hopped with Summit and Simcoe. What are we calling it? You guessed it, Dirty Hippie. It weighs in at 8%, 95 IBU and has a whole lot of hoppy goodness balanced with a nice malt backbone that you would expect out of an Imperial Red. Does it really smell like a dirty hippie? Come on in, grab a pint and decide for yourself.

Appearance:  Pours a golden amber with a lasting creamy head.

Taste:  A nice blend of citrusy and piny hops. A little toast and caramel. Finishes fruity.