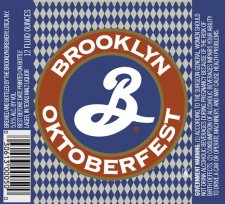 From Brooklyn Brewery – When Crown Prince Ludwig of Bavaria wanted to celebrate his wedding engagement in 1810, he did what any good Bavarian prince would – he threw a beer festival. Both the festival and the special beer served there became known as Oktoberfest. Brewed from the finest German malt and hops, Brooklyn Oktoberfest is true to the original style, fullbodied and malty, with a bready aroma and light, brisk hop bitterness.

Taste:  Some toasty and caramel malts with modest fruitiness and a nice finish including toasty malts and modest hop spice.

Overall:  Last year I sampled a bad bottle of this beer, so I didn’t share my notes.  I am happy to report this beer is spot on for an Octoberfest beer.  Tasty, malty, super drinkable.