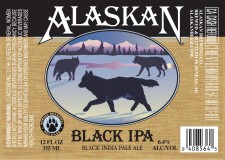 From Alaskan Brewing – Alaskan’s spring seasonal release is a new beer experience created from a combination of traditional beer styles. Alaskan Black IPA has the appearance of a porter or stout but combines the roasted malty characters with the refreshing flavor and bright aroma of an American IPA.

Appearance:  Pours dark brown with a slight red hue holding it up to the light. It starts out with a big pillowy white head that subsides to a thin cap of khaki suds. Leaves behind insane amounts of lacing.

Mouthfeel: On the thin side of medium bodied. Juicy with modest carbonation.

Overall:  While a little conservative for the “dank” Black IPA that I enjoy, this was a tasty, well rounded hoppy beer.