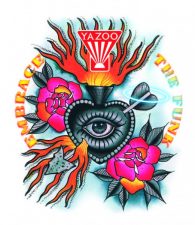 (Nashville, TN) – Yazoo Brewing Company is pleased to announce at 12pmCST on 11/23/16 public enrollment in the second year of our private membership club called “The State of Funk” will begin.

Back for a second year “Citizens” in The State of Funk will receive an entire year of these benefits:

The cost per Citizen is $300 with benefits good from January to December 31st, 2017. Due to each of the 8 different exclusive State of Funk bottles being a single non blended release Citizenship is capped at 150 total people. Registering to become a Citizen is easily completed through the Yazoo webstore at yazoobrew.com/store (direct link).

Head of Yazoo’s Sour & Barrel aging program Brandon Jones says “I truly feel like we have created the best private craft brewery membership available. Selecting single barrels of oak aged beer ensures that our Citizens are getting some of our best and uniquely developed liquid. This gives us the opportunity to create special beers with distinctly individual character.”

Membership is once again expected to sell out before the enrollment cutoff date of 12/31/16. Trustees and Proxies are allowed for out of area Citizens to have their bottles picked up. Gift
S.O.F. Citizenship purchases are also allowed and can be set up after the purchase is made.

Yazoo Brewing Company is an independent locally owned brewery in the Gulch area of downtown Nashville, TN. Opening in 2003 the brewery now distributes bottles and draft beer to Tennessee, Mississippi, Colorado, New York and Indiana. The onsite taproom is open weekly Wednesday through Saturday, with tours of the brewery also available. The Yazoo Embrace The Funk (ETF) program is a series of wild and sour beers aged in various types of oak ranging from 6 months to 3 years.