Wynkoop’s 2012 Beerdrinker Of The Year Search Is Underway 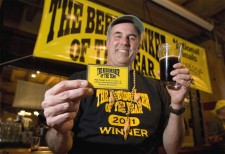 Denver, CO – Once again, Wynkoop Brewing Company is seeking beer resumes from the nation’s most beer-minded men and women for its 2012 Beerdrinker of the Year contest. The 16th annual contest seeks and honors America’s most passionate, knowledgeable beer lovers and ambassadors.

They also design and brew a special batch of beer at Wynkoop Brewing (with head brewer Andy Brown) as part of their winnings.

Best of all, the winner also enjoys the unmatched glory that comes from being named the nation’s greatest beer nut. “I was pinching myself for about a week,” says Phil Farrell, the 2012 Beerdinker of the Year.

At this year’s American Homebrewers Association convention in San Diego, Farrell reports, “I had groups of complete strangers come up to me and take my picture and ask for autographs.”

The biggest highlight of Phil’s year? “Rogue Brewery’s John Maier shook my hand,” Farrell says, “and told me he thought it was fantastic and a big accomplishment to win the title. This from the man who took the very first BJCP exam, won the Homebrewer of the Year title as an amateur, and is now a legendary professional brewer.”

year. At the event a panel of wigged & robed beer experts and previous Beerdrinker winners will grill the finalists with tough beery questions. They then pick the 2012 winner.

This year’s three finalists will stay in Denver’s famed Brown Palace Hotel while in town for the finals. The iconic hotel is one of several new allies for the 2012 Beerdrinker of the Year title.

To enter the contest applicants must submit beer resumes that include the entrant’s beer philosophy and details on their passion for beer and 2011 beer experiences.

Resumes should also detail the entrant’s understanding of beer and its history and importance to civilization, along with the entrant’s efforts to educate others to the joys of great beer.

Resumes must be sent by email to [email protected] and be received by Wynkoop by no later than December 31, 2011. Each entrant will receive an email confirmation that their resume was received.