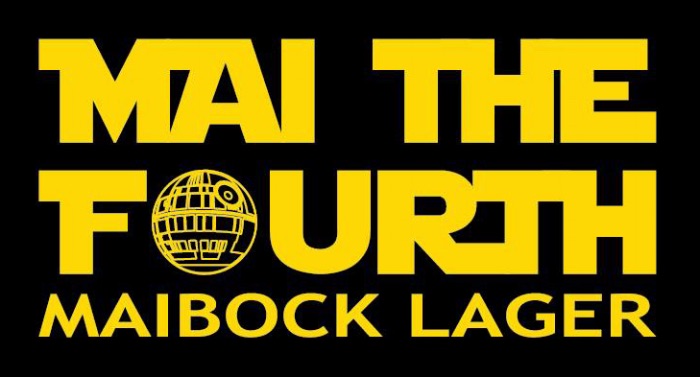 It is a period of lagered brews. Wit’s End Brewing Company, brewing from a hidden base with Strange Craft Beer Co., have made their fourth annual beer in support of Star Wars Day, May 4. During the Brew, Wit’s End managed to use their secret mashing techniques and extended lagering to produce MAI THE FOURTH, a Maibock lager with enough flavor to fill an entire taproom. Pursued by summer month, this classic spring style races to glasses aboard draft taps and in Crowlers that can serve the people and restore lager to the galaxy…

Mai The Fourth, a traditional German-style lager, is brewed to highlight malt characters without too much sweetness, uses German hops to help balance it out, and was fermented with Bavarian lager yeast to produce clean, malty flavors with a touch of fruity grape notes.

“There are two things that we’ve always been a big fan of here at Wit’s End, Star Wars and a good beer pun,” explains head brewer Tyler Bies. “This beer was brainstormed four years ago as a way to celebrate May The Fourth. We always try to highlight big malt flavors in our beers, so our take on a Maibock is at the upper end of the style for color and ABV.”

The result is a malty balanced beer weighing in at 7% ABV that could frighten you with its sorcerous ways. Craft beer padawans, know your limits on this one…

Mai the Fourth will be released on draft and in Crowlers at the StrangeWit tasting room on Friday, May 4 at 12pm, with food from My Angel’s Fine Cuisine and limited edition Mai The Fourth t-shirts for purchase.

At the dawn of the fourth wave of craft beer (in 2011), Scott Witsoe opened Wit’s End Brewing Company and hasn’t looked back since. Through the years Wit’s End has added some hardware on the walls including GABF® and World Beer Cup® awards, and forged a new partnership with Strange Craft that exists in the form of a co-tasting room and brewhouse near its original location in Denver’s Valverde neighborhood. Now brewed by Head Brewer Tyler Bies, Wit’s End flagship beers, such as Jean Claude Van Blonde and Green Man Ale, are available on draft at Strange Craft’s tasting room at 1330 Zuni St Unit M, Denver, CO 80204. Find the brewery online at witsendbrewing.com.