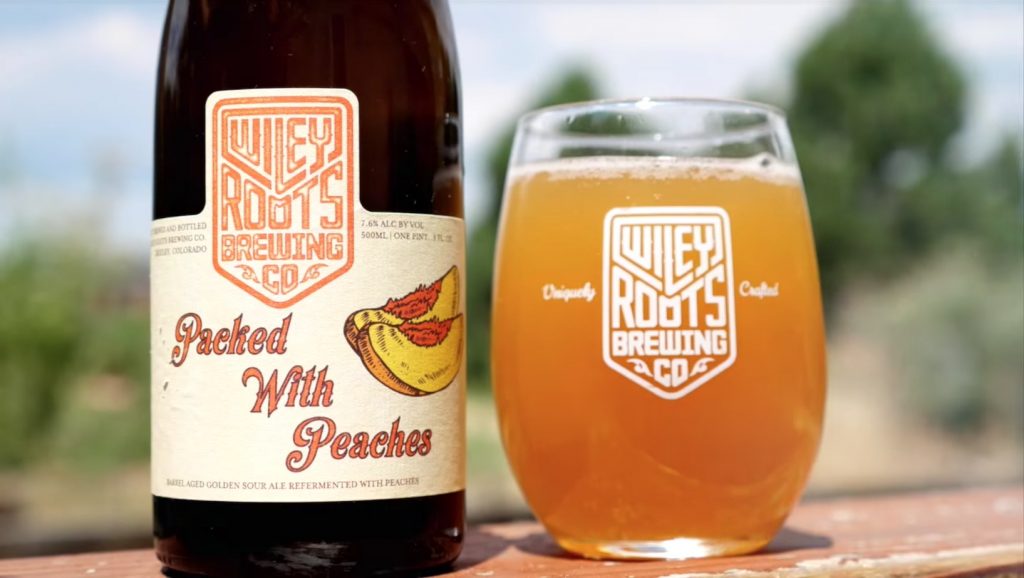 Packed With Peaches is one of the beers within the brewery’s “Packed With” series, which focuses on barrel fermented and barrel aged sours that are re-fermented on whole fruit. Unfermented wort is inoculated in the barrel and left to age until the beer reaches the desired flavor profile and level of dryness. Once the beer is ready, it is racked into stainless steel fruiting vessels for re-fermentation on various types of fruits at specific fruiting rates. This year’s Packed With Peaches is the culmination of over two years of dedication to mixed-culture barrel aged beers, starting with a combination of four neutral American oak barrels from a single brew-length that were barrel fermented and then aged in the barrels for 18 months. The beer was then re-fermented and aged on three pounds per gallon of peaches from the Western Slope of Colorado for an additional six months, after which the beer was bottle conditioned for three more months. Fuzzy peach skin and peach juice aromatics dominate the foreground with a juicy, perfectly ripe, peach character that is paired with an assertive, but balanced, acid profile which quickly dissipates, revealing soft oak and vanilla notes.

Due to the anticipated popularity of Packed With Peaches, the brewery will be offering pre-release vouchers for sale online beginning on Monday, August 13 at 8:00 AM MST. Approximately 70% of the bottles released to the public will be available for reservation through the online voucher system, while 30% of the bottles will be available at the brewery on the release day, Friday, August 17, starting at 12:00 PM MST. In addition, the brewery will be releasing bottles of Peach Table Beer, a sessionable mixed-culture saison aged on second use peaches, online and at the brewery.Wiley Roots hopes that the release of Packed With Peaches will introduce new customers to the brewery’s award winning mixed-culture barrel aged beer program, while rewarding existing customers with the ability to pre-purchase vouchers online. Packed With Peaches and Peach Table Beer will also be available on-tap at the brewery. Wiley Roots expects to sell out of bottles of Packed With Peaches, limit two bottles per person, and Peach Table Beer, limit six bottles per person. Customers are encouraged sign up for the brewery’s email list (wileyroots.com/wileymail) to receive a notification when bottles become available and to mark their calendars for Monday, August 13, 2018.

Wiley Roots believes beer should be unique, crafted from the highest quality ingredients, and brewed with a sense of responsibility – to the craft and to the surrounding community. We believe that brewing craft beer is an art and grounded in the same core values many can subscribe to: honesty, integrity, hard work, and belief in one’s ability to create and share. Wiley Roots offers award-winning, uniquely crafted ales in downtown Greeley, Colorado. We are a very small, award winning brewery, with Gold and Bronze medals from the Great American Beer Festival in 2017, 2015, and 2013. Wiley Roots Brewing Company opened in the summer of 2013.