(PORTLAND, OR.)  –Widmer Brothers Brewing announced the next six beers in the 30 Beers for 30 Years Series, which is a series of 30 beers each brewed to commemorate a specific year and beer in the brewery’s 30-year history. These beers are some of the most memorable, innovative or otherwise important beers in the brewery’s history. 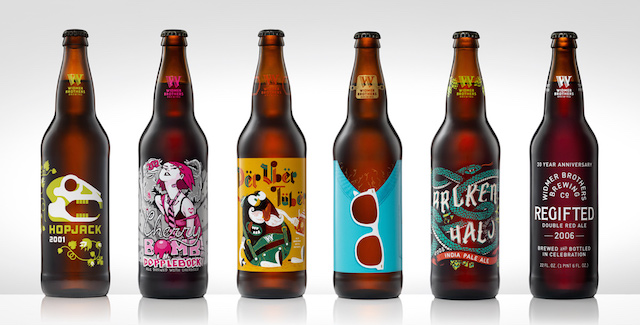 All six beers are available now in the Portland area for a very limited time, with only 30 cases of each beer packaged and distributed. All were brewed at Widmer Brothers’ 10-barrel pilot brewery to the original recipes and specs from their year of origination. Each release in the 30 Beers for 30 Years Series features label artwork by Portland-based artists.

Hop Jack is our long time go-to Pale Ale that was named after a piece of trusty brewery equipment used to amp-up the hop character of a beer. Hop Jack is a classic NW Pale Ale that is always a fan favorite when Widmer Brothers brewing team does a small batch for the pub. Tyler Lang of Always With Honor designed the label.

Dër Ubër Tübër was Brewer Joe Casey’s brainchild for the 2003 OBF. Casey devised this brew to be made using Russett potatoes in the mash, resulting in a crisp, clean profile, and plenty of hops to balance it out. Dër Ubër Tübër clocks in at 7% alcohol by volume (ABV) and requires that you yell the name of this beer with a very strong German accent. The design team responsible for the Dër Ubër Tübër label consisted of Josh Kenyon, Colby Nichols, and Brett Stenson at the Jolby and Friends studio.

Sommerbräu was introduced as Widmer Brothers’ summer seasonal in 2004. The beer is the brewery’s take on a Kölsch – and only the second time in 20 years the brothers created one – this beer uses Widmer Brothers’ house Hefeweizen yeast, but was cold fermented for a crisp, clean profile. The Sommerbräu label was designed by OMFGCO.

Broken Halo was also borne out of a Portland beer festival creation. In 2004, one of Widmer Brothers’ brewers, Angel Marquez brewed an Imperial IPA called Halo for the Oregon Brewers Festival, which was met with rave reviews. Widmer Brothers then created a more sessionable IPA from the recipe, and since there’s a mix of good and bad in everyone, the beer was named Broken Halo. Sasquatch Agency created the Broken Halo label.

Re-Gifted Red is an imperial version of NW Red, better known as Brrr Seasonal Ale, which was originally slated to be launched as a seasonal in 1999, but never was due to Snow Plow Milk Stout’s release. With the eventual introduction of Snow Plow as the brewery’s winter seasonal, NW Red was shelved. The brewers loved the beer, however, and for the Holiday Ale Fest in 2006, Widmer Brothers brewed this aggressive version again to turn some heads. Ben Parsons of Ficusamongus designed the Re-Gifted Red label.

Widmer Brothers is hosting a launch party for all six beers at 5:00 p.m. on December 4, 2014, at the First National Taphouse in Downtown Portland.

To see all six labels and the rest of the labels in the 30 Beers for 30 Years Series labels, and to learn more about the artists and individual beers, please visit www.30beersfor30years.com. For more information about Widmer Brothers Brewing, visit www.widmerbrothers.com or follow the brewery on Facebook.