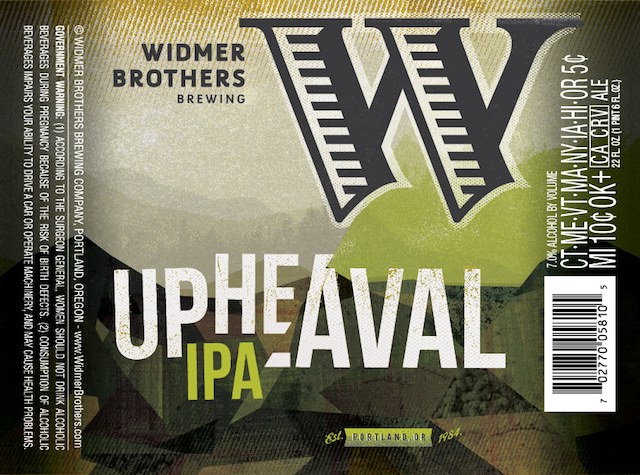 “Upheaval is a Northwest Style IPA, which we think of as different from West Coast Style IPAs and East Coast Style IPAs,” said Rob Widmer, co-founder of Widmer Brothers Brewing. “We are building on the tradition of great IPAs brewed in the Pacific Northwest with a focus on bold aromatic, flavorful hops with unparalleled balance and execution. We’ve been brewing IPAs for more than ten years and have brewed more than fifty IPAs in just the last couple years. Upheaval is the best IPA we’ve ever brewed.”

The hops in Upheaval IPA are sourced from both hemispheres and include the Alchemy hop blend for bittering; and Chinook, Simcoe, Brewer’s Gold, Willamette, and Nelson Sauvin varieties for aroma. The result is a bold IPA with tropical fruit, citrus, berry, and resiny hop aromas and flavors, with a balancing malt profile and yeast character.

“Upheaval builds upon what people love and have come to expect from IPAs brewed in the Northwest,” said Brewer Ben Dobler. “This beer is huge on hops but it’s also really balanced. We’re using a unique combination of hops from all over the world to push peoples’ expectations of the style.”

Upheaval IPA’s malt bill contains 40 percent wheat, giving the beer a full body and a solid malt backbone. The beer is not filtered, resulting in a hazy, light copper appearance and allowing for a more pronounced yeast character.

This new addition to Widmer Brothers’ year-round line-up will become available in markets across the country throughout February on-draught, in six- and 12-packs, and in 22-ounce bottles. Upheaval IPA can be found using the Widmer Brothers beer finder at widmerbrothers.com/find-beer.

It’s a new dawn for the Northwest IPA. Upheaval IPA is the result of our brewers’ relentless pursuit of the perfect IPA. With more than two pounds of hops per barrel, Upheaval IPA unleashes a huge hop flavor and aroma with serious bitterness and balanced finish. Brewed with wheat, the result is a hazy, bold IPA that’s Unfiltered. Unexpected. Unapologetic. Uncompromised.

Please visit www.widmerbrothers.com for more information about the brewery, or follow Widmer Brothers on Facebook for the latest news and happenings.