VICTOR, ID – Grand Teton Brewing Company, known throughout the West for their exceptional craft brews, is proud to announce the release of Lazy Marmot Maibock, the first in their 2014 Cellar Reserve series.

Lazy Marmot is brewed squarely in the German tradition. Grand Teton Brewing used Idaho 2-Row Pale along with German Vienna and CaraHell malts for a clean, slightly sweet flavor, then subtly spiced the brew with German Tradition hops. They fermented with lager yeast from a monastery brewery near Munich and allowed it to ferment and condition for more than three months for a smooth yet crisp character. 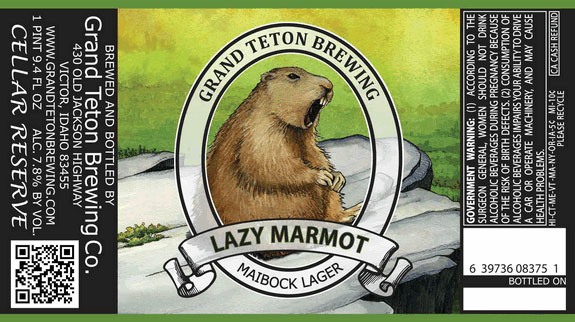 In Germany, strong lagers are called “bocks” or “bock biers.” There is some dispute over the origin of the designation. “Bock” in German also means goat, and that animal often appears on labels as a symbol of the style. Some say bocks are brewed for the season of Capricorn, which includes Christmas, while others say that the beer has the “kick of a goat.”

The historically-minded staff at Grand Teton like to credit the style’s originators, the people of Einbeck, in northern Germany. The beers that gave Einbeck the nickname, “City of Beer”, were first brewed in the 14th and 15th centuries. They were brewed very strong because they were sent long distances, fermenting on the way. Before long, Einbeck, pronounced Ein-bock by the southerners of Bavaria, became famous for its strong beers, which came to be known simply as “bocks.”

Einbeck is a beautiful medieval city, architecturally distinctive for the one story–or taller–arches that grace each house. These arches allowed entry of the town brew kettle, which passed from house to house according to a lottery held each year on May 1st. A pale bock brewed to commemorate the lottery became the city’s most celebrated beer—Maibock.

Try Lazy Marmot Maibock as an aperitif to stimulate the taste buds, or with any flavorful fish, such as trout or salmon.