Asheville, NC – Wicked Weed Brewing in Asheville, NC will release it’s second bottled beer on March 22nd in its tap room at 91 Biltmore Avenue. This beer, Black Angel Cherry Sour has been a flagship sour for the brewery since opening day. Brewer and owner, Walt Dickinson, is extremely proud of this version of Black Angel. 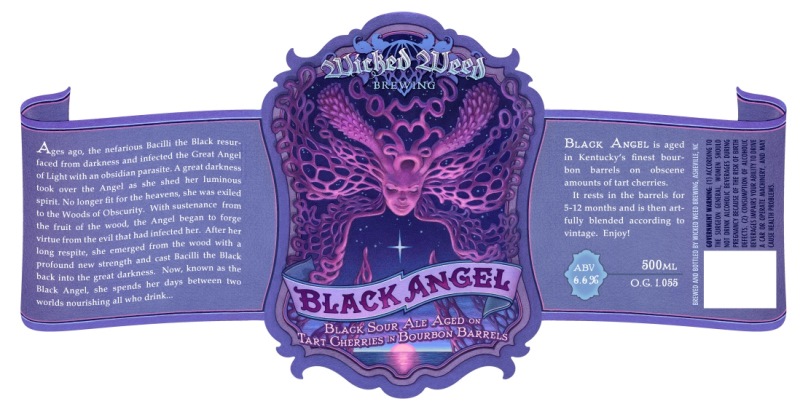 “Black Angel is a beautiful harmony between a complex bourbon aged beer and a kriek. It has chocolate and vanilla flavorswith lots of bright cherry character and a touch of barnyard,” said Walt. “This is a balanced beer that tastes super clean on your palate. This is definitely the best batch of Black Angel Cherry Sour we have ever created. And,” he added, “for all those interested in cellaring, this beer is going to age exceptionally well.”

Each signature 500 ml bottle of Black Angel Cherry Sour be available for $13.95 with a 12 bottle purchase limit. In addition to bottles, a new batch of Black Angel will go on tap the morning of the 22nd. Bottle sales will start at 11 am, with a VIP gathering beginning at 10 am. A local band will being playing at 1 pm.

“The first bottle release went really well,” said Abby Dickinson, owner and director of events. “The event was extremely organized, but at the last minute we decided to pull down the first 60 people who had been waiting for hours outside the brewery. It was really fun to meet and greet with all these people who came out early. We got such great feedback that we decided to do that again, but this time with the first 100 people in line.”

Black Angel is not the last beer craft beer fans should anticipate Wicked Weed will put in bottles this spring.

“We have been brewing these barrel aged beers for the last year in anticipation of putting in a bottling line.” said Walt. “ When the bottling line came in, we were ready with a wide variety of beers to release. Our beer drinkers should anticipate a lot of great sour and funky beers going into bottles this spring.”