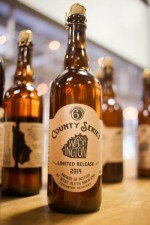 Lexington, KY – For the first time ever, West Sixth Brewing is going to release a series of small-release bottle conditioned beers celebrating the unique qualities and character of the Commonwealth of Kentucky.

We plan to release around 3 different beers each year, in extremely limited quantities.

The first beer of our series is American Wild Sour Ale we’re calling Washington County. Nearly a year in the making, the base beer for this ale is a blend of berliner weisse and saison, with secondary fermentation provided by our friend Brettanomyces lambicus in a used red wine barrel. Tart, crisp, and funky, it weighs in around 7% ABV with high effervescence created during the bottle conditioning.

Being the first in our series we’ve named this wild ale after Washington County, the first county created in Kentucky after our fair Commonwealth was founded. There are only 225 750ml bottles available, and once they’re gone, they’re gone.

We’re going to release this first bottle next Monday, October 13th, at 5pm in the taproom. Bottles will be $20 and we’re going to limit it to one bottle per person since supplies are so limited.

We expect them to sell out very fast, so be sure and come down if you’re interested. And, either way, keep a look out for future announcements – we’re really excited about the future of the West Sixth County Series!