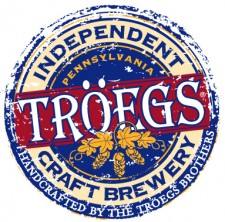 Tröegs was recognized for its flagship year-round beer, Troegenator Double Bock, a strong dark lager with a bready malt profile and a rich, chewy body. It is the Hershey, PA brewery’s most decorated beer to date, having been awarded five gold and two silver GABF medals since 2006.

“It all boils down to the hard work and dedication of everyone at Tröegs,” said John Trogner. “We constantly focus on consistency with our beers, and the fact that Troegenator continues to receive accolades from the industry is a testament to our commitment to brewing consistent beers.”

The 2014 GABF competition winners were selected by an international panel of 222 expert judges from the record number of 5,507 entries, plus 89 Pro-Am entries, received from 1,309 U.S. breweries.

“Once again the Great American Beer Festival brings the best of the best together in one place,” said Chris Swersey, competition manager. “At a time when American brewers offer so much variety, it’s a true honor to be recognized as one of the finest. Our greatest gratitude to the winners and all entrants whose innovative and outstanding beers help make this such an esteemed competition.”

For more GABF competition information, including the 2014 winners list and photos, visit GreatAmericanBeerFestival.com.