(Bloomington,IN) – Upland Brewing Co. announced today that Teddy Bear Kisses will be available for wholesale on draught and in 4-packs on September 15 and on tap at Upland locations on September 19. 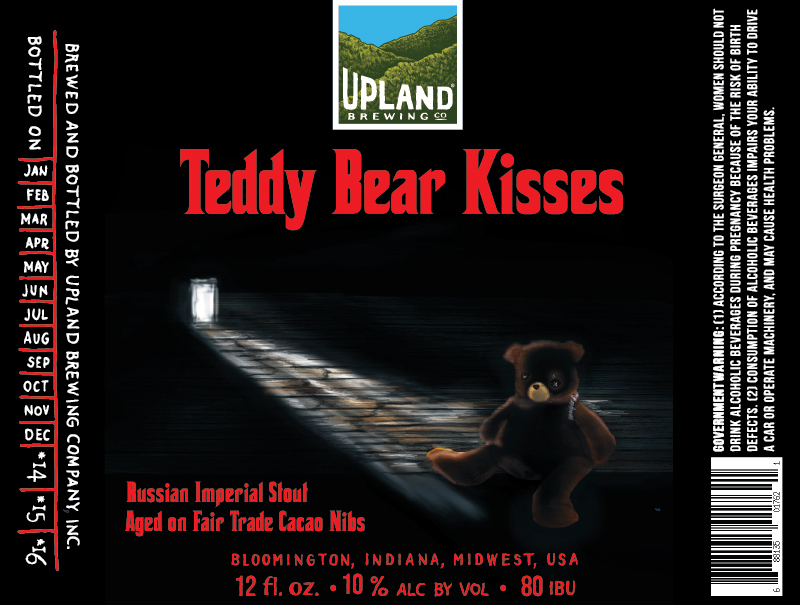 A dark and robust beer brewed in the traditional stout method. Teddy Bear Kisses features an abundance of dark malts and high alpha hops for a powerful impact of roast, chocolate, and sweet bitterness. The lucky few who cuddle up to a warming session with Teddy Bear Kisses, can sense the velvety malt character, balanced bitter intensity, and soothing chocolate notes created by long aging on fair trade cocoa nibs. Teddy Bear Kisses will make you feel warm and happy inside, but it’s definitely not your childhood cuddle toy. Teddy Bear Kisses won a Gold Medal in the 2010 World Beer Championships.

ABV: 10.2 IBU: 7.6 SG: 21 SRM: 47.1
About the Brewery: Located in Bloomington, Indiana, Upland’s rich history dates all the way back to 1998. Taking traditional recipes and making them a bit more awesome, Upland Brewing Co. came up with their own recipes rooted with inspiration from good beer and good friends, providing a fresh local option to their communities. The name Upland comes from the term geologists gave to this area of Southern Indiana land which was never overrun by the glaciers that flattened much of Indiana’s landscape. The adversity of the land bred independent thinkers who had strong wills, a connection to the land, and a wry sense of humor about life. Upland’s approach to brewing beer honors the spirit of these people and this place.

Brace Yourself for What Sierra Nevada Is Bringing to GABF! Left Hand Brewing Returns To The United Kingdom