(Bloomington,IN) – Upland Brewing Company is investing $4 million to expand its highly regarded sour ale program. This expansion includes hundreds of wood barrels and tanks and a new bottling line, all of which will be located in a freestanding cellar facility adjacent to the company’s original brewpub in Bloomington, Indiana. 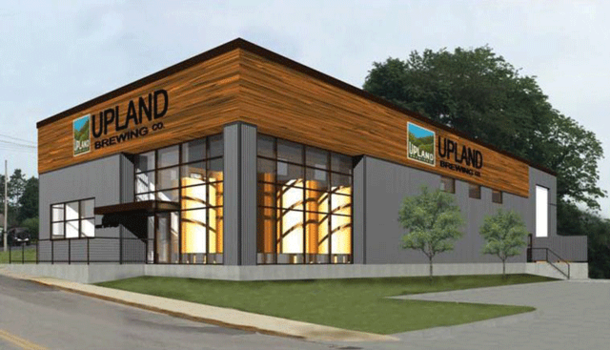 Construction at the site is already underway. The existing brewhouse will remain at the center of Upland’s brewpub, and the new cellar will connect to the brewhouse via a series of underground stainless steel pipes. The company expects the new facility to be fully operational by April 2016.

Upland began brewing sour ales in 2006, focusing first on traditional methods and recipes. The program then evolved to include experimentation with novel ingredients and process innovations to achieve unique beers and flavors representing the character of the brewery and its location. The local climate, with its four distinct seasons and extremes of temperature and humidity, has encouraged different flavors and aromas to be expressed across the beers’ long fermentations in wood tanks. Many beers go further to incorporate local fruits that are hand-harvested by family farmers.

“We aim for multi-dimensional, complex beers that express the interaction of grains, fruits, and different microbes, all managed with a high degree of patience and time. Ten years of exploring the sour space has taught us so much. But we learn new aspects of the process every year,” according to Upland’s President, Doug Dayhoff.

In 2016 Upland will begin limited wholesale distribution of certain sour ales. However, ultra-small batch beers will continue to be available only via a lottery system directly from the brewery. “While this expansion will increase our production by several multiples, we’re still talking about very small and limited production volumes, only 2,000 barrels,” said Dayhoff.

In addition to the investment in facilities and equipment, Upland will soon make key hires to expand its brewing and marketing teams. Experienced professionals interested in those areas should send a resume to [email protected]

About the Brewery: The name Upland derives from the term geologists gave to the hilly region surrounding Bloomington, Indiana, which was never overrun by the glaciers that flattened much of Indiana’s landscape. The adversity of the geography bred independent thinkers who had strong wills, a connection to the land, and a wry sense of humor about life. The brewery’s mission of “making remarkable beers in remarkable ways” honors the spirit of these people and this place. Upland brews over 50 different styles of beer annually. For information about brewery tours and our brewpubs, please visit: www.uplandbeer.com.