[Updated x2] – California Brewery For Sale – Who Might It Be? (Not Noble) 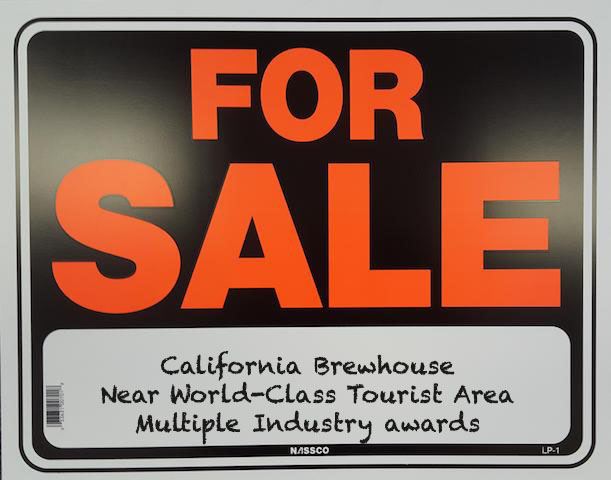 Update: Vito Trautz, Marketing Director of Noble Ale Work reached out to us and denied Noble Ale Works is for sale based on his conversations with ownership. It has been stated in this article that this is an educated guess and not fact.

Update x2: California Craft Brewers Association reached out to The Full Pint and claimed that not only is the brewery not Noble Ale Works, who fits the below description fairly well, they claimed it is not a SoCal brewery. We will stay on top of this caper.

Because of the nature of this advertisement, it was forwarded on to our desk for further review to break down what brewery exactly might be for sale. After going through a process of elimination and speaking with other folks within the California beer industry, we believe we are 90% certain we know who this brewery might be. Please follow along.

“World-class California tourist destination city” – There are plenty of great, touristy destinations in California, but not a large amount of “tourist destination” cities. San Diego, San Francisco come to mind. When you add in the term “World Class” you think of people that flock from all around the world to make a visit. Then the city of Anaheim comes into play, as families from all over the world flock to visit Disneyland.

“Multiple GABF and WBC awards won in recent years.” – There are many highly decorated breweries in California from North to South. There is one that comes to mind that has just won multiple GABF and World Beer Cup awards.

Who we most likely think it is: Noble Ale Works of Anaheim, California.  Noble Ale Works is dead in the middle of a “world-class” tourist destination. Their tasting room is busy. It’s in a large warehouse facility with an unwrapped 30-bbl brewhouse, slated for expansion. They have recently signed on with Craft Brewers Guild for distribution, as well as Day One in the Portland Area, which makes up the multiple distributors part of the advertisement. Noble Ale Works has cleaned up at both World Beer Cup and Great American Beer festival over the past few years.

Noble Ale Works is owned by multiple partners, and it has been speculated that this was one of the leading factors into change in management and the departure of Brewmaster Evan Price. We reached out to a source at Noble, who said they have shown the advertisement posted from CCBA to one of the owning partners and have denied the brewery is for sale. Keep in mind the person who placed this ad is asking for a standard non-disclosure agreement, which would surely put any employee at Noble in the dark if this is in fact 100% true.

Update: Vito Trautz, Marketing Director of Noble Ale Work reached out to us and denied Noble Ale Works is for sale based on his conversations with ownership. It has been stated in this article that this is an educated guess and not fact.