(Hershey, PA) –  Tröegs Independent Brewing of Hershey, PA, has released Haze Charmer Hazy Pale Ale. The beer will first appear throughout Pennsylvania, then reach other states where Tröegs is sold in mid-March. 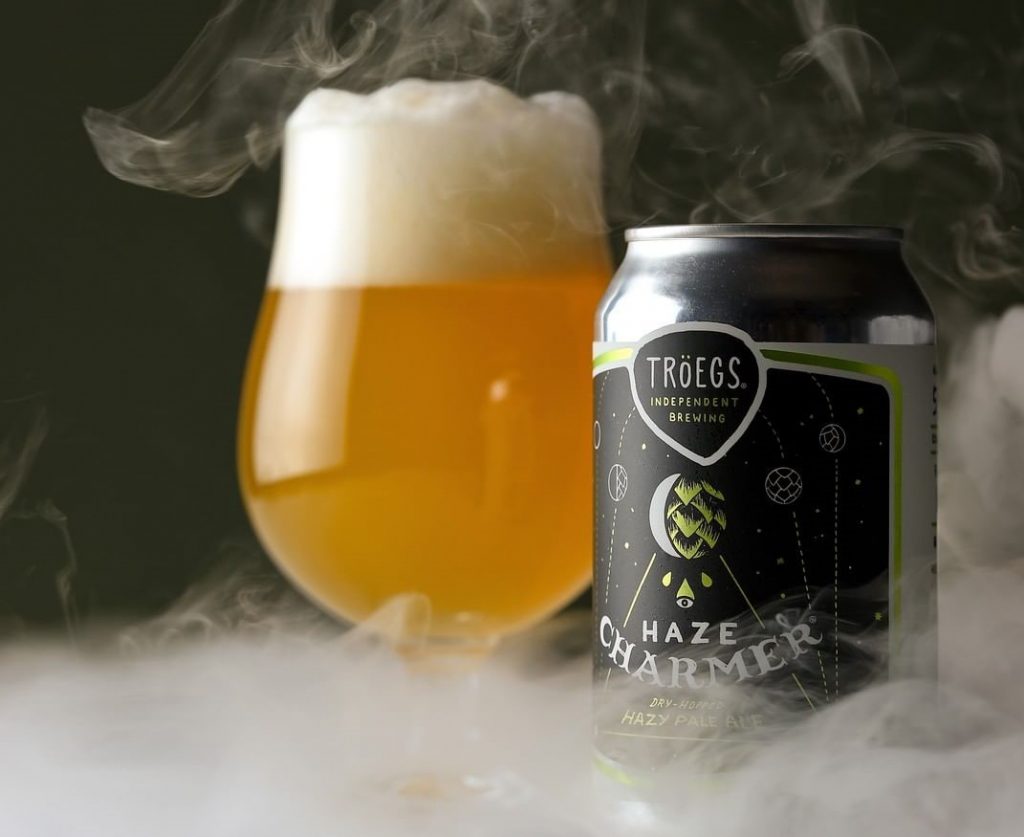 The new beer – developed over six months on the brewery’s small-batch Scratch Brewhouse – features a soft and hazy base thanks to a combination of pale malt, malted wheat, raw wheat, oats and honey malt. A dry-hop combination of Citra, Lotus and El Dorado delivers notes of juicy pineapple, fresh grapefruit, candied peach and a hint of white pine. Fermentation with London 3 yeast keeps the profile soft, and the ABV clocks in at 5.5%.

“It’s been a fun ride perfecting this recipe,” says Brewmaster John Trogner. “More than ever before, we dialed in to the relationship between fermentation and the hop combination and how a yeast strain can fundamentally change the way you smell hops. It’s not just about the hops you choose. It’s more about the total picture, the overall relationship among ingredients. As we tasted an early pilot batch and started to see the dynamics of that relationship, a lightbulb went on. It’s like finding a new color of the rainbow.”

Clocking in at 5.5% ABV, Haze Charmer is cloudy with a haze that helps retain hop oils that would otherwise drop out, resulting in a soft and sessionable beer that is big on hop flavor and low on bitterness.

For the label art, Tröegs once again partnered with Philadelphia’s Lindsey Tweed. Tweed’s astronomy-meets-magic illustration captures the art and science of recipe development, and the importance of the timing of hop additions is captured in the hop phases arcing across the label.

“The hop phases reveal a bewitched hop hidden in the dark side,” says Tweed. “And below drips an all-seeing eye. I reached for my Ouija board for inspiration on the woodcut-style type.”

Haze Charmer will be available year-round in 12-oz. cans, 12-oz. bottles and on draft. It is now rolling out in Pennsylvania and will appear in Connecticut, Delaware, Maryland, Massachusetts, New Jersey, New York, North Carolina, Ohio, Virginia and Washington, D.C., in mid-March.

Founded in Pennsylvania in 1996 by brothers John and Chris Trogner, Tröegs Independent Brewing is driven by a sense of adventure and curiosity. From the beginning, our brewery has been built by family, friends and kindred spirits who share a love of great beer.

“We’re not an English ale brewery,” says co-founder Chris Trogner. “And we’re not a German lager brewery. We take bits and pieces from each one of those traditions and try to come up with what we think is a very creative and great-tasting beer.”

Tröegs started working in earnest with local ingredients back in 2002 with the debut of holiday favorite Mad Elf. Today, the brewery buys about 25,000 pounds of local honey and 100,000 pounds of Pennsylvania-grown barley every year. Tröegs also sources local produce including pumpkins, cherries, peaches, nectarines and strawberries from the fertile Fruit Belt of Pennsylvania.

Through rotating seasonal menus, Tröegs Scratch Kitchen is a showcase for new tastes and flavors, and our Guided Production Tour was named fourth best brewery tour in America by readers of USA Today. The annual Art of Tröegs contest showcases our love of art by challenging fans to create original artwork inspired by our beers.

“We’re drawn to people with a sense of adventure,” says co-founder John Trogner. “And we think they’re drawn to Tröegs.”