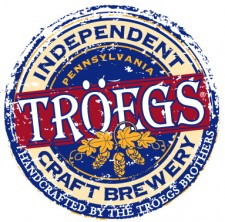 News from Troegs Brewing on an art contest, the latest addition to the Scratch Series, and Medal Winnings. Info originally found from Troegs Tales newsletter.

To enter submit a picture of your bottle cap art with your name, address and phone number to Tröegs Brewery. Submission can be emailed to [email protected] or sent to The Art of Drinking Tröegs Contest, Tröegs Brewing Company, 800 Paxton St. Harrisburg, PA 17104. Submissions without contact information will not be valid.

The grand prize winner will receive a $500 cash prize. Entries will be accepted until midnight on July 31, 2010.

Still confused? Go to the Tröegs Web site and click on The Art of Drinking Tröegs contest link. You will find numerous examples of previous entries along with complete contest rules. Get inspired and make art.

HARRISBURG, PA — Tröegs Brewery won a Gold Medal for Troegenator Doublebock at the Brewers Association (BA) World Beer Cup®. The World Beer Cup is a global beer competition that evaluates beers from around the world and recognizes the most outstanding. Gold, silver, and bronze medals were awarded in 90 beer-style categories. The awards were announced on April 10, 2010 in Chicago, IL.

Tröegs Brewery won a gold medal in the Bock category for Troegenator. “Troegenator continues to win major awards at the Great American Beer Festival and the World Beer Cup,” said Chris Trogner. “This is a proud moment for our company and our brewers.

World Beer Cup 2010 winners were selected by an international panel of 179 beer judges from 27 countries. More than 3,800 breweries in 100 countries were invited to compete, and an impressive field of 642 breweries from 44 countries participated.

About the World Beer Cup

The World Beer Cup has been held every other year since 1996 and is presented by the Brewers Association. Based in Boulder, Colorado, USA, the Brewers Association (BA) is the not-for-profit trade and education association dedicated to small and independent American brewers, their craft beers and the community of brewing enthusiasts. Visit BrewersAssociation.org to learn more. The association’s activities include events and publishing: CraftBeer.com, World Beer Cup®; Great American Beer Festival℠; Craft Brewers Conference and BrewExpo America®; National Homebrewers Conference; National Homebrew Competition; SAVOR: An American Craft Beer and Food Experience; American Craft Beer Week; Zymurgy magazine; The New Brewer magazine; and books on beer and brewing. The Brewers Association has an additional membership division of 20,000+ homebrewers: American Homebrewers Association. Consumers are invited to learn more about the dynamic world of craft beer at CraftBeer.com. For the full list of winners, visit WorldBeerCup.org.

Scratch #29 started off innocently enough as a Pale Ale fermented with Westmalle yeast. After fermentation, the beer was aged for twelve days in virgin Pennsylvania Oak barrels supplied by Keystone Coopers. And then the fun began. Even after brief wood-aging the oak’s intensity overwhelmed the Bravo and German Northern Brewer hops used in the boil. But have no fear, a two-week dry-hop with Willamette and Hersbrucker hops dulled the oak and transformed this beer.

Bottled-conditioned for three weeks before release, Scratch #29 imparts an intense spicy flavor with grassy notes from the Hersbrucker hops. Hints of orange and a slight alcohol burn come through with the high carbonation leaving “pins on your tongue” in the finish.