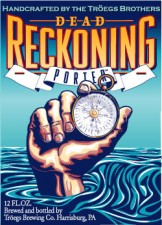 Return of Dead Reckoning Porter for 2013

As summer winds down, it’s time to start thinking about the crisp, cool air and colorful foliage of autumn. The change in the seasons also means that our fall seasonal, Dead Reckoning Porter, is coming! Dead Reckoning will be available in 12-ounce bottles and 1/2-barrel kegs beginning August 12 in the Central PA market, and will continue throughout our eight-state distribution footprint into September and October. Unfiltered and aggressively hopped for the style, Dead Reckoning’s flavor originates in the chocolate and roasted malts, then follows through with sharp, earthy bitterness and a rich, smooth cocoa mouthfeel. We will also release our Anthology #2 variety packages in conjunction with Dead Reckoning Porter. Anthology #2 features an assortment of Tröegs Pale Ale, HopBack Amber, DreamWeaver Wheat and, of course, Dead Reckoning Porter.

Tröegs recently joined a stellar list of breweries from across the country when we partnered with Ales for ALS™ to brew a special Scratch Beer to benefit the ALS Therapy Development Institute (TDI), the world’s leader in ALS research. ALS (more commonly known as Lou Gehrig’s disease) is a progressive neurodegenerative disease with no known cure. Loftus Ranches, one of the Yakima Valley’s longest running hop farms, has developed a special proprietary hop blend used exclusively for Scratch #106. Tröegs will donate a portion of all proceeds from sales of this beer to the ALS TDI.

Fans of craft beer collaborations will be excited to learn that we’ve got another joint Scratch Beer venture with Fat Head’s Brewery on the horizon. This time, we’re doing something John Trogner is calling “Second Hand Tropical Stout.” According to John, it will be a Chocolate Stout brewed with brown sugar, lactose, and toasted coconut, the latter of which was added via the Infüz-O-Matic 5000. While a release date is unknown, expect this collaborative effort to yield a delicious and popular treat!

Finally, we have the winning beer from a special internal Tröegs event dubbed The Metal Brewer. Last November, a team of five Tröegs employees amazed a panel of local celebrity judges with an inspiring presentation, thus earning the privilege to brew their award-winning beer on the Tröegs Scratch Beer system. Dubbed “Beet It,” this Saison was brewed with 50lbs. of fresh local beets from Strites’ Orchard and an abundance of black peppercorns. Spicy, earthy and tingly on the palate, “Beet It” also displays a pleasant pinkish hue, thanks to a special red beet purée added during the fermentation process.